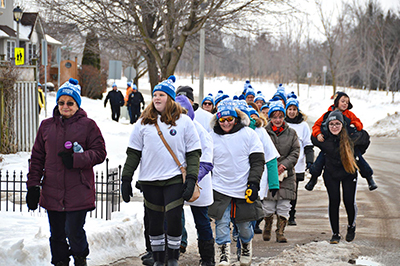 With more people than ever relying on the Orangeville Food Bank to feed themselves and their families, the local organization is doubling down on its fundraising efforts in an attempt to keep up with growing demands in the town.

Next week, on Saturday, Feb. 22, the Food Bank will host its third-annual Coldest Night of the Year event. Held at Westside Secondary School, the fundraiser will bring hundreds of area residents together to help those who are hungry, hurting and homeless in our community.

“We're pretty excited that we're rapidly coming up on our third-year event. We will have a 2km, 5km and 10km walk out in the community to help those who are most vulnerable,” said Heather Hayes, Executive Director of the Food Bank. “Coldest Night of the Year is a fundraiser that happens across Canada on the same night every year in support of organizations just like ours.”

Since its launch in 2018, the event has raised $110,000 in Orangeville. This year, Ms. Hayes is hoping to rake in at least $65,000. It's money the organization desperately needs if it is to continue operating in the community.

“We were really lucky that we found out about this fundraiser. Food banks, as most people know, don't receive provincial or federal funding. We need to find ways to raise more than $50,000 to pay for our rent every single year – that's a large amount of money,” Ms. Hayes said. “We need to be able to make sure we have our rent covered so that we can continue to provide the services that we do for our friends, family and community members.”

People can sign up to participate individually, as a member of a team. Currently, there are 34 teams registered and 159 walkers confirmed for the event. Last year, Ms. Hayes estimated approximately 350 people came out over the course of the day in support of the food bank, and she expects to at least match that number once again in 2020.

With routes already planned, and volunteers in place, Ms. Hayes says the organization is making one last push to get as many people from the local community as possible involved.

“We're really trying right now to get people to register a team. It's a great thing to do with family, friends or even co-workers. We're hoping to have 45 teams take part this year,” Ms. Hayes said.

Any team that, collectively, raises $150 will get a tuque, buttons and “all other kinds of great stuff” as a thank you, Ms. Hayes said, while a light meal will be served by culinary students from Westside following the event. There is a registration fee of $25 for people who simply want to show up and participate in the walk.

Addressing the elephant in the room, Ms. Hayes admitted visits to the local food bank are up substantially from this time last year. Perhaps most concerning is the changing demographic of those making use of the local facility.

“Right now, we see around 700 people per month. We see a high percentage of seniors coming through, more so than we ever have before, and around 34 percent of people using the Food Bank are children,” Ms. Hayes said. “Senior usage alone has risen 1,400 percent since 2011 – that's a huge demographic for us now. Also, single adults are becoming a bigger demographic than they ever have before.”

So, for those without plans next Saturday (Feb. 22), head on over to Westside Secondary School to take part in something special. For those who are unable to make it, there are other ways to make your mark.

“Even if you yourself don't have the ability to walk, finding a team and supporting someone on a team is a fantastic way to get involved. That's where we're going to see the biggest amount of support come through, is through building those teams and supporting walkers on those teams,” Ms. Hayes said.

For more information on Coldest Night of the Year, visit cnoy.org/Orangeville.