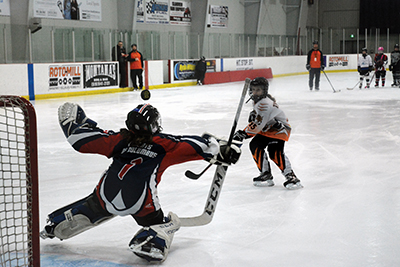 The annual Orangeville Tigers Sweetheart Tournament brought 1275 players and 85 teams from as far away as Timmins to battle it out on the ice in Orangeville on January 23 – 26.

It was non stop hockey for 12 divisions of young players.

Included in the weekend was a skills competition on Saturday that allowed players to demonstrate their ability while competing one-on-one with other players.

This is the 42nd annual Sweetheart tournament.

The Orangeville Sweethearts was the name of the first girl's hockey team in Orangeville back when girls hockey was just starting.

Jim Cronin was the first coach of the team and president of the hockey association.

The tournament was created in memory of Jim's daughter Sherri who was one of the original players.

“The original team was started in 1974,” Jim explained. “My daughter Sherri wanted to play hockey. There was an ad in the newspaper looking for girls who were interested in wanting to play hockey. My daughter answered the ad and I went with her to talk to these people.”

After the team was created, Jim was asked if he would be the coach. Jim had playing experience but no coaching experience at the time.

“I had some help,” he explained. “I had a brother-in-law who helped me, and my daughter's boyfriend played junior hockey and he came on board to give us an hand and that's how it all got started.”

At the time, there were very few girls hockey teams.

The Sweethearts played teams from Shelburne, Hillsburgh, Inglewood, and Mississauga.

It was tough for girls teams at the time to get ice time as the ice was usually reserved for boys minor hockey.

Over the years the Tigers have expanded to have a full compliment of divisions from those just starting out to veteran players.

Jim said he is proud of the current hockey organization and praises those who have brought the Hockey Association to what it is today.

“I think it's wonderful,” Jim said. “The people who have come after us have done a marvelous job. When you hear there's 87 teams coming to play on a weekend, I think that's quite an accomplishment.”

The tournament is also a boon for the town as those 1275 players also bring their families who all need a place to stay and something to eat.

The Tournament was a huge success with final games being played on Sunday.