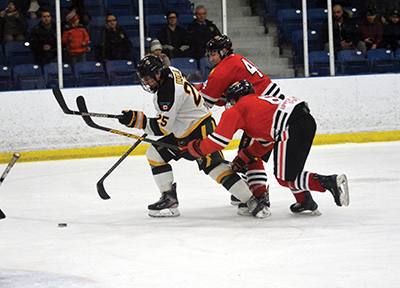 The Junior C hockey schedule is down to the final few games as small town hockey in the region gears up for a playoff run.

In the North Carruthers Division of the Provincial Junior Hockey League, the Alliston Hornets are way in out front with 70 points – 18 points ahead of the second place Stayner Siskins.

The Alliston team leads the entire League and are six points ahead of the Lakeshore Canadiens of the West Stobb division.

The Hornets had an 11 game winning streak snapped on the weekend (Jan. 25) when they took a 4 -1 loss to the Orillia Terriers.

The Stayner Siskins are in second place with 62 points. They slipped to third spot for a while but bounced back with a couple of recent wings to over take the Orillia Terriers by a single point after the weekend.

Orillia slipped into third place but will be a strong contender one the playoffs are underway.

The Terriers have won 24 of 39 games so far this season.

From the north end of the Division the Penetang Kings move up a notch in the standings and are now in fourth place – tied with the Schomberg Cougars with 37 points.

The Caledon Golden Hawk have struggled this season after having a fairly decent start to the year. They are now in sixth place with a 14-24-1 record including two overtime losses.

Two points behind Caledon, the Midlan Flyers are in the number seven spot. Midland has had an up and down record over the past few seasons.

They currently have 29 points.

In the basement, the Huntsville Otters have only won ten of 39 games this year to put 21 points on the record.

When the playoffs get underway, Alliston will meet Huntsville in the first round. The second playoff berth will be a toss up at this point between Stayner and Orillia. Orillia could move back into second place with a couple of wins.

Penetang and Schomberg will meet in the first round.

The final regular season games for the Carruthers Division are slated for Sunday, February 2.