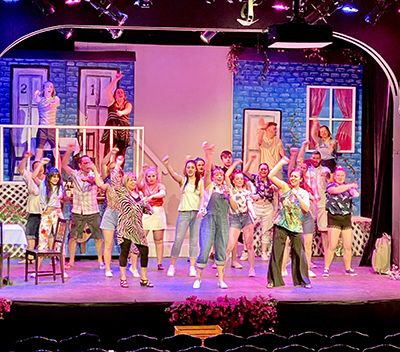 “What a great show this is,” exclaimed Bailey Mills, starring as Donna in Orangeville Music Theatre's (OMT) production of Mamma Mia, running for its second weekend, this weekend at the Opera House. “People were up dancing [at the Sunday matinee] – singing along – they were really into it. It's crazy, really fun.”

She said, “I started in T.O.Y.S. nearly 30 years ago and here I am now, singing the part of Donna in Mamma Mia on the main stage. It's kind of a surreal thing. Our cast is wickedly good, especially our one on one scenes.

For her other life, as with most members of community theatre groups, “I work for Ross Hughes as his assistant and I've worked for Zehrs for the last 13 years,” she outlined, commenting, “I don't know how not be busy. I always have to be busy.

“So, I identify with Donna. She's always up.”

Director of the show, Keith O'Connell, told the Citizen, “It's going wonderfully well. Audiences have been extremely receptive to the show, dancing in the aisles. We bring up the house lights and they're singing along – it's fantastic.

“We rehearsed since early September. This is my first show with OMT. There are a lot of new members. This show seems to have brought in some new people.”

For his working life, as it were, Mr. O'Connell works for the Region of Peel, “but I have been directing and choreographing shows since the late '80's. I love the community aspect of it. Each show brings out a new group of folks and some become life long friends. Every show has a family atmosphere with each new group of folks.”

After participating in high school productions, Mr. O'Connell developed a fondness for community theatre: “I got involved with [Toronto-based] Curtain Call Players [est. 1979] in 1988. I've done directing there – this out of need – they needed a somebody – I have no formal training, some drama lessons. But I've seen it all over almost 30 years.

“I also perform,” he informed us. “I just did a cabaret with Toronto Musical Productions.”

He came to OMT from directing his last show, Sister Act, with Curtain Call. “I am strictly interested in community theatre, “ Mr. O'Connell insisted. “A lot of [professional] people got their start with community theatre. For OMT, I live in Brampton and making the drive up for the last three months.

“I actually know someone living here in Orangeville and he was telling me about OMT. So, I went on their website and saw they were looking for a director for Mamma Mia. I applied and was lucky enough to get the job. It's a show I've always wanted to direct. I would love to come again – this is a great group and I love the small town atmosphere.”

Tesha Mazur, who has been involved with OMT for about five years, has been directing Elf jr with the young set.

“I was involved at first with helping with the dresses, and then stage manager and now I'm directing 33 youngsters in the cast, ages seven to 15 years. We kind of sorted out a 50/50 split between new kids to OMT. The others have been with us for a few years,” said Ms. Mazur. “I love working with the kids and watching them grow from first rehearsal to show ready. My daughter is in the show but, at the end of the day, I'm just as proud of each of the rest of the kids as I am of my own child.

“I broke them down into groups,” Ms. Mazur began to explain her methods. “I broke them into scenes and I directed as we went. They were so good that we were running the first act together in November: we were running the first act within two months of starting rehearsals. Daniel, who is playing Buddy, has been with OMT for five years. He played Peter Pan and the Tin Man in the Wizard of Oz and has been in quite a few shows and had some leads.

“I didn't even have to work on his character building because he is Buddy; Daniel brings Buddy alive; he brings everybody up with him.

“The young lady playing Jovi , the female lead is Blaire, my daughter. She ‘s been with OMT also about five years. She was Wendy in Peter Pan and Glenda in the Wizard of Oz.”

Emma, who is “playing Michael, has been with OMT three or four years. This is her first lead role.”

She talked a bit about the team working with her to put the show on: “Barb White is the music director. She did that for Beauty and the Beast. So, this is her second musical. There are 30 kids on the stage for two songs.

“This is my first time directing, I love the creativity, making ideas from my head to the stage; my ideas come to life. There are a few changes. I changed some comedic parts of it because Daniel is so funny.”

We brought Blaire Mazur into the conversation. “The show is really great; it's inclusive: everyone seems to be involved.” Enthusiastically, she explained, “The great thing about Elf jr is each kid has a speaking part. Every child has a line.”

Her mother elaborated, “I had enough lines in the show that everybody got a line, which has never happened in all the shows because there were always so many kids. And our choreographer, Teisha, she makes sure each kid has a part in one dance or more.

“This is the first time that we've actually been able to give each kid a line.”

As to her future with OMT, “I'm also president of the Board of Directors. I'm thoroughly enjoying my involvement in the theatre. I started with the technical side because my daughter was in it.”

How to encourage youngsters who might like to join in, Blaire offered, “I would say, even if you're not the best singer, you should come. It shows how to like people you don't know. You can make new friends and with theatre, you can pretend to be someone else when you're on stage. It's very inclusive and it's great to see each what they can do and it's great to see them come around and say, “Oh. I can do this!”

“When I talk to parents,” said Ms. Mazur, “I'm involved in theatre and I tell them, bring your kids and get them involved. All kids are included; it's about the fun aspect of it.”

She commented, “I just like to see kids grow.”

Elf jr the Musical is playing at the Opera House on the weekend from Friday January 24 to Sunday, January 26.

Tickets for both shows at www.orangevillemusictheatrecom/tickets

Bailey Mills warned us: “The tickets for Mamma Mia are selling well – get them as soon as you can.”

Due to the show's popularity, a matinee performance of Mamma Mia has been scheduled for 2 p.m. on Saturday, Jan. 18.