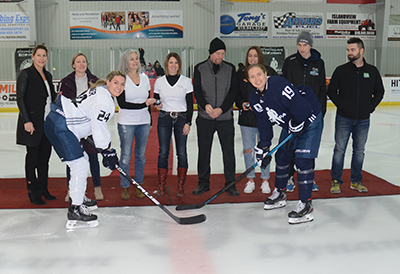 The seats at the Alder Street arena in Orangeville were filled with fans during an exhibition game hosted by the Orangeville Girl's Hockey Association in partnership with the Professional Women's Hockey Player Association.

It was a chance for many Orangeville Tigers players to come out and see the best women's hockey in the country as two teams filled with professional and Olympic hockey players battled it out on the ice.

The event sold 650 tickets prior to the game with more people turning up at game time making for a full capacity crowd at the arena.

When word spread of the caliber of hockey that was going to happen, many girls hockey associations from around the region joined with of Tigers players to come out and experience hockey at this level.

The PWHPA hosts several events over the season playing in several locations around the country.

The younger players in the crowd had a good opportunity to see and be inspired by the skill of these high level players on the ice.

They weren't disappointed. The players themselves divided up the teams to make for an exciting competitive game.

The crowd was treated to some highly skilled hockey on the ice by top notch players. Photo page B2.