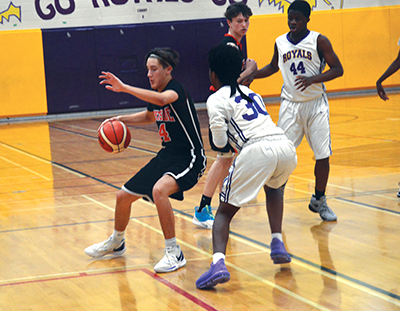 The Westside Seconday School Thunder junior boys team are in fourth place in the District standings after taking loss on the road in Shelburne on Monday (Dec. 2).

The Thunder met up with the Centre Dufferin District High School Royals in their second game of the season.

Westside had a good result in their first match-up of the season scoring 68 points to Norwell District Secondary School's 48 in their first time on the court this year.

Monday's game in Shelburne saw the CDDHS team take a 12 -5 lead at the end of the first quarter.

Westside's Peter Morneau hit two for two on foul shots early in the third quarter. Morneau followed up on another foul just a minute later and once again dropped the ball through the hoop on both shots.

The Thunder worked hard in the final quarter but the score gap remained about the same and they had to settle for a 55 – 29 loss to the Shelburne team.

“We took it to task in our first game last week against Norwell and we played a really good game,” said coach Kurt McMurray. “This is only our second game so were slow into the season. We realize that Shelburne

is a first place team – they won last year – we came out to put together a game where we could hold our own and I felt like we did that. A lot of it comes down to the defence. We gave away too many passes, and we weren't staying in our zone. We'll be going over those basic defensive moves. It's nothing some strategy can't fix.”

Westside's Graydon Stokes, thought the team played well but let up in the in the middle two quarters.

“I think the second and third quarter really killed us,” Graydon said. “We played decent in the first and then in fourth but we fell hard in the second and third. We were moving the ball around. We shooing out ‘three's – we didn't miss too many of those. On defence we worked the zone and didn't let too many outside shots go. We have to work on rebounding and breaking out the ball.”

The Thunder junior boys will be back on their home court at Westside on Monday, December 9, when they will host Erin District High School.