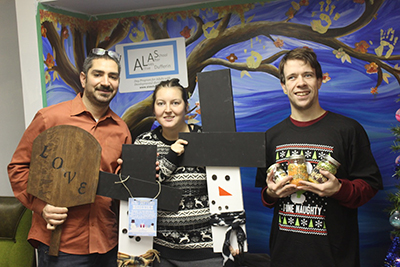 Active Lives After School (ALAS) Dufferin is doing what it can to help local residents with “exceptionalities” find a sense of belonging, and showcase their capabilities in the local community.

Founded almost five years ago, the local non-profit organization primarily works with individuals with varying levels of developmental disabilities. It was launched in 2015 by a group of local parents who were mindful of the fact that their children had very few options in the way of daytime programming upon graduating from high school.

What started out as a three-day-per-week program operating out of Orangeville's Masonic Hall on Fifth Avenue has transformed into a daily initiative, with a permanent home at the Lord Dufferin Centre. Today, ALAS Dufferin provides services to roughly 25 individuals between the ages of 21 and 50.

There are two core components to ALAS programming in Dufferin County. The first is therapeutic recreation, and involves getting individuals out in the community doing “fun stuff”, such as swimming, karate and yoga. The second part is a new initiative, introduced in 2018, called Active Lives Active Giving. Here, ALAS Dufferin has partnered with seven other community non-profit organizations, notably the Orangeville Food Bank, Meals on Wheels and the Orangeville Library, to provide individuals with working opportunities here in town.

Howard Dalal, who recently joined the ALAS Dufferin team as executive director, noted the organization is currently in the midst of a transformation of sorts.

“We want to create not only a recreational program here in Dufferin County, but a program with a purpose. Everybody needs a sense of purpose in their lives, and our individuals are no different,” Mr. Dalal told the Citizen. “Once these guys hit 21, they're out of school and there's nowhere for them to go. The big issue is, when these people are left at home, they have behaviours, are put into group homes and there's really nothing for them to do to bring them back into the kind of environment, like they experience at school, they're familiar with. That's where we come in.”

He added, “Our goal is to provide our individuals with life skills, job skills that they can use to further and progress their lives.”

Mr. Dalal noted he was in the process of creating a life skills room at the ALAS Dufferin facility in Orangeville, which will feature a bedroom and shop front.

“We want to get our guys to the point where they may be able to live on their own, or get a job. The simple things that we take for granted, such as making a bed, may be challenging for them because of motor delays, or processing delays. This is all about giving our people opportunities,” Mr. Dalal noted. “With the shop front, we want to teach individuals how to take inventory, how to stock shelves and do things more up their alley that they would be able to learn.”

Through his work operating a summer camp for people with disabilities, and a previous position held with the Toronto District School Board, Mr. Dalal came face-to-face with two individuals who, he says, defied all projections and expectations to make something of their lives.

First, was a young man by the name of Sam Forbes. Sam has autism and a movement disorder. Readers may know him by his alias – the Starbucks dancing barista. In 2016, a video of Sam went viral, showcasing his ability to make different a variety of different beverages, all while busting a move. He would later go on to appear on the Ellen DeGeneres show.

“I first met Sam at the camp I run on my property. When he first arrived, he didn't understand why he was there. He was sad. He told me his parents brought him there to work on job skills. His confusion was based on the fact his teachers at school didn't think he was going to be able to do anything with his life. He was going to school, but was working towards a certificate, rather than a diploma, so Sam wasn't sure why he was bothering.”

He added, “One day, I said to Sam, ‘If I had a magical wand, what is one job you wish you could have'. He instantly said he wanted to be a barista, because in the morning, when people walk into the store to get their coffee, they're grumpy. As soon as a barista hands them their coffee, they have a smile on their face. Sam wanted to bring happiness to people, so I told him I would make his dream come true.”

It was a long road. Howard reached out to Starbucks, who bought into the idea of having Sam on board as a part of their team. Things didn't work out so well at the beginning. Sam struggled with the drink recipes, and didn't seem to be catching on. Howard would spend the next two months working with Sam after hours in an attempt to help him understand, and grasp, the role of a barista. Still, nothing seemed to be working.

Then, one day, Howard received a text message from Chris Ali, the manager at the Starbucks store where Sam was working. Sam was dancing in the back area, with other employees. Instantly, Howard noticed something “weird” about the video.

“Sam was doing this dance flawlessly. He was picking up on all the steps he needed to pick up on for this dance. It was the dance to Watch Me (by Silento). I reached out to one of my colleagues and wondered how this was possible, because it's such a complicated dance. She told me that comes from a different part of the brain, so he could grasp it,” Howard said. “The next day I walked in, and we started dancing behind the bar. Sam picked up on one drink, two drinks, three drinks, four drinks. By his 38th drink, I knew he had it, and we decided to post a video online. Things just blew up from there.”

Howard also worked with another individual by the name of Carly Fleischmann. Carly is completely non-verbal, having cognitive oral motor delay. When Howard was introduced to her at a Toronto school, he was informed that there is no way for Carly to communicate with people, and to simply do the best he could to help her.

“The thing that struck me right away with Carly was that she knew exactly what she wanted to say in her head, but the message from the brain to her mouth was scrambled,” Mr. Dalal said. “So, I introduced her to 21st century technology. I thought, if I could teach her how to type, she'd be able to at least communicate with people.”

Now, several years on from that introduction to technology, Carly has written and released a best-selling book, titled ‘Carly's Voice', and, last year, served as a guest host of the Stephen Colbert Show. Now, she serves as a beacon of hope for individuals with disabilities, showcasing the possibilities when someone takes the time to help and understand.

“My reason for sharing these stories is to show that all people have potential, it's just about finding out what that potential is, and getting it out there,” Howard said.

Currently, the individuals at ALAS Dufferin are participating in a new initiative designed to teach a variety of different skills, while also raising money for the organization to ensure as many people as possible can benefit from its programming.

Individuals have been creating festive wooden snowmen, and making different soups, both for sale to the community. The snowmen, each with their own specific look, are available for $25, with the soups (Italian barley, coconut thai and five bean) available at $8 for a small batch, and $10 for a large batch. Both the soups and the snowmen have been distributed to various businesses around town for sale, with all proceeds going back to ALAS Dufferin.

“We wanted to come up with something that would allow our clientele to showcase their ability, while also providing a way for us to generate some money to allow more participants to take advantage of our program,” Mr. Dalal said. “Because of funding cuts, because our individuals are often left to wait for their passport funding (money given by the provincial government to help them pay for programs and services), a lot of our clients can't come here full-time, they can only come one day a week, and that's with their parents somehow scraping the money together.”

He added, “Because we're non-profit, we want to be able to come up with ways to get more people enrolled in our program.”

The cost of attending ALAS Dufferin programming is $75 per day. Mr. Dalal noted if the organization succeeds in selling 100 snowmen, it will allow one individual to attend programming on a full-time basis for a “significant period of time”. Currently, ALAS has sold between 50 and 60 snowmen.

“I personally like when we volunteer with Meals on Wheels because we get to interact with people we wouldn't usually interact with. They don't get much of a chance to get out, so it's a chance for these people to meet new people too,” Christopher said. “What we do is deliver meals to seniors, both at the Lord Dufferin Centre and in the community. I really like it.”

Christopher said he enjoys participating in any activity at ALAS Dufferin, and sees most things as a learning opportunity.

He added, “The more we do, the better opportunity for us to get into new activities and be able to do more things as we continue forward in this transition of a positive future outlooking at ALAS Dufferin,” Christopher concluded.

Referencing the likes of Christopher, Sam and Carly, Mr. Dalal noted that, sometimes, all it takes is a little bit of attention and care to make all the difference in someone's life.

“As far as I'm concerned, every one of our individuals has these sorts of capabilities. Our issue is, come the age of 21, they're never given the opportunity. I feel that here at ALAS, we're providing those opportunities for people to showcase their abilities, whether it be making soups, making snowmen, or something else. They have the ability,” Ms. Dalal concluded.