Glomalin, heart of the land, is being produced locally 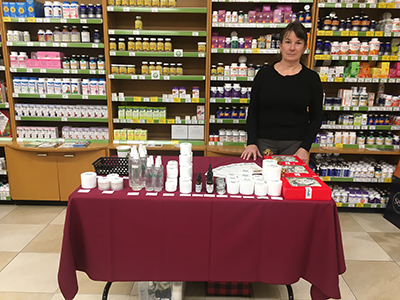 Angella Hughes explained it to us, “Glomalin is glycoprotein found in soil and without it, soil cannot support the eco-system.”

This is the name of her organic and natural skin care product company, which she sells at Harmony Whole Foods and Kala Yoga in Orangeville.

Ms. Hughes makes this product herself. While there is no soil or glomalin, as such, in her wares, she used the word for her company name “because the idea is that the product contains only ingredients found in the nature that are non – harmful to people. There is glomalin in the soil, which support s the healthy eco system that grows the plants that I use- a healthy product for you skin.”

“I'm an electrical engineer and still in it,” she went on to tell us about herself. “My day job is I run a tech company in Mississauga that treats contaminated water; I co-founded the company, Xogen Technology Inc. We deal with advanced oxygenation. That technology is primarily concerned with landfill leaching. The market we're addressing is North America and there are thousands of landfills in the US; some are very contaminated.

“It is depressing work – everybody wants clean water as a right but nobody wants to pay to clean it up. This is true everywhere; that's why governments have to make regulations to force companies and municipalities to clean up the water. They won't do it without regulations. Humans are big polluters.”

She said, “My husband, several years ago, got cancer, so, I switched our food to organic. Even though there's all these skin products that claim to be organic, they still contain elements that are harmful, petroleum based products.

“My daughter, who is a wholistic nutritionalist, she did a few courses on making skin products and then we did some research on line. When we got it, we shared it with our friend and that's how the company was born. “

“About a third of my house is dedicated to making these products,” she explained. “I make it on my own. My daughter moved to Vancouver to work with a DNA company. They map your DNA and design your diet and fitness based on that. DNA exposes tendencies of your body and then recommends things you should do on your fitness and diet and also what you should do to avoid chronic diseases.

“Depending on the new technology from Finland, Biohacking is, depending on how you eat can not only optimize your fitness but also changes your DNA. They found me online with Glomalin and invited me to be an exhibitor at the Biohacking Summit in Toronto. It was the first one they had in North America – usually, they hold them in Helsinki. The Biohacking philosophy is increasing human performance, increasing quality of life and longevity.”

Back to the subject of her daughter and her developing their own product, Ms. Hughes continued, “We just started playing around with formulations until we came up with product that we want to use. Close to the consistency that I wanted. One of the outcomes that surprised us was, all the ingredients were to be plants-based, certified organic as much as possible. The result was how well those products performed. People were raving how well they worked. They kept skin plum and, even in the winter, their skin was really well. My expectation was, we were shooting for the quality of what we were using but they out-performed all the others in a huge way, way beyond expectation.

“So far, it's still me making this product. My day job is three days a week and then four days to make the product. So far, I can keep up. I have seven retail outlets but I'm planning to increase my sales with my online store. I sell to one place in Victoria and a retreat in New Mexico because my very good friend uses my product and her sister owns that place.”

Going truly international, “I have two guys that I've met in Japan. We were trying to get the contract to clean the water after Fukushima.”

She was referring to the nuclear accident at the Fukushima Daiichi Nuclear Power Plant in kuma, Fukushima Prefecture. The accident was started by an earthquake and tsunami on March 11, 2011.

“We didn't get the project but those two guys suggested bringing Glomalin to Japan. They said cosmetics in Japan is worth billions of dollars in Japan. Why don't we bring your product here? They're marketing it to the high end hotels for the Olympics next year.”

“In terms of developing scale,” she began to plan for the proposed increase in demand, “I would have to step from my home, into contract manufacturing. The next step is to design and manufacture automated machinery to make this product and my partner is Siemens.

“In our day to day lives, we can buy organic food products that are basically coming out of an automated factory,” she rationalized, “organic yogourt, for example: to produce however millions of units, they use an automated process for filling the units, putting them in the package and putting the label on. That's the most time consuming, so, you want to automate that.”

At home still, “My processes in terms of making it are very simple: mixing, some of it you have to heat up . Those things are not complicated; they should be easy on a large scale.

“In my previous career, I worked in outer space. I worked on the Space Shuttle's main engine. When the Challenger blew up, initially, they thought those engines were responsible but they weren't. A critical part was at fault and it was made in Etobicoke by Walbar. They actually wasted $7million on scrap material to try to fix it.

“So, Rocketdyne is the company that makes the engine but Walbar made the faulty part. Nasa said to Rocketdyne, put somebody in your company that can find out why there's such a problem making that part and I got that job and, over time, I figured out what the problem was and wrote a big long report.”

Modestly, she remarked, “I guess the bottom line is I'm a problem-solver.”

“My long-term goal is to leave the water business and do Glomalin full-time once I have the scale of sales. I've been doing the water for 19 years and it's time for me to move on. The other thing is, because the water business is such frustration, the by-product of Glomalin can help clean up the planet because my products are made with organic material that does not harm the planet.”