Orangeville Mall gone for good, to be replaced by new ‘big box’ outlets 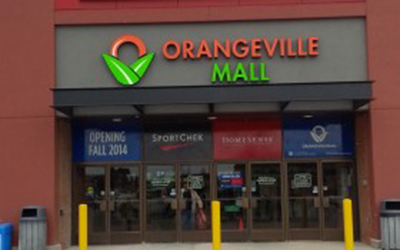 While specific details have yet to be revealed to the public, it would appear the Orangeville Mall as it once was is dead and buried, making way instead for a big-box store strip mall.

During Council on Monday evening, Mayor Sandy Brown confirmed that seven stores are confirmed for the front, First Street facing side of the mall, with American off-price department store Marshalls set to be the only new addition to town.

Joining Marshalls in a new location at the Orangeville Mall will be PetSmart, while an expanded Shoppers Drug Mart will also be part of the renovation. Those stores will join Metro, SportCheck, HomeSense and Michaels.

Mayor Brown confirmed that a site plan had been submitted to the Town by mall owners Strathallen Capital Corp, who took ownership of the building in October 2017. That site plan has, subsequently, been approved, and building permits have been issued.

Complementing the seven stores at the front of the mall, there will be space for at least six businesses along the Hansen Boulevard-facing (south) side of the building, behind Metro. Mayor Brown noted Perfect Shoe Repair, Nails For You and Orangeville Mall Dental are likely to remain onsite.

No timelines have been given for anticipated completion of the renovations currently ongoing at the facility, while Strathallen representatives have, thus far, provided no real updates to the Citizen.

One thing we can confirm, however, is that Santa Claus will have a new home in Orangeville this year. Santa having resided at the Orangeville Mall for at least 40 years, the ongoing renovations have brought about a forced relocation to the Alder Rec Centre.

“The mall management and ownership are quite upset about having to close the mall (over Christmas). We have had discussions around town to see what options we have, and have decided the best place for Santa Claus would be at Alder,” Mayor Brown said. “The mall owners have graciously offered to pay for some of the expense, and F-Stop (a local camera store) will be involved, helping with photos and portraits. It's a good decision for the town to make this happen.”

A full schedule highlighting when Santa will be in town will be released to the public shortly, Mayor Brown noted.