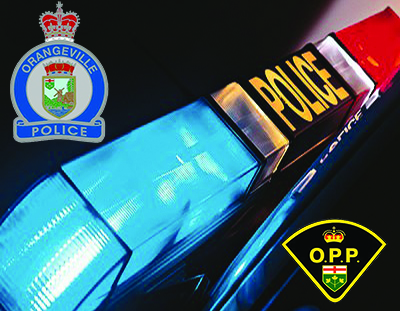 Such was the concern amongst Council members, a decision was made to delay the vote over whether the municipality would accept a costing proposal put forth by the Ontario Provincial Police to take over policing services in Orangeville, until Dec. 2. The vote was originally scheduled to take place this coming Monday (Nov. 25).

A statement initiated by Mayor Brown and elaborated on by Mr. Brennan late on during Monday's meeting, said the additional $1.6 million OPS expense would cover the cost of three new police cruisers, radio systems for the cruisers, and new equipment for seven police officers.

This projection apparently stemmed from a study by an outside third party earlier this year to identify and determine costs each Town department is expected to incur over a roughly five-year period. In that report, it was stated that OPS may be eligible to receive $1.6 million in development charges, to help cover one-time expenses that, on the face of it, would pave the way for the force to hire seven new officers. Costs associated with the hiring of any new officers would not be covered by development charges, and would instead be added to OPS' annual operating budget.

Mr. Brennan confirmed that none of this information had been presented to Pomax Consulting, the firm tasked with providing an in-depth analysis and overview of the Town's policing options.

“As (Pomax consultant Jon Hambides) said, he looked at status quo right now for policing, and not on increasing the number of officers (in OPS) going forward. The analysis he put together is as we are today, with costs going out 16 years. It did not include extra bodies, or extra police asks. Certainly not these asks,” Mr. Brennan told Council.

While not taking into account this new information, Mr. Hambides has estimated the Town could save as much as $58 million by 2036 by transitioning to a policing service provided by OPP.

As chair of the Orangeville Police Services Board, Coun. Todd Taylor admitted he was floored by this latest revelation.

“We're a year into this, I think it's okay to say when you're surprised by things, or don't understand things… I sit on (the police services) board, and this is the first I'm hearing of this tonight,” Coun. Taylor stated. “I don't understand where this came from. To me, this is muddying the waters. We're up against a vote, which I have spent considerable time on, now to have this thrown at us at the last minute. There's no way we can go into a vote on this a week out and not have all the information properly digested.”

He added, “I would say, with seven days to go, people are very close to making their minds up. I'm not into this, this is not right. I'm disappointed to be sitting here tonight and not knowing. I want to make the right decision here. This muddies everything.”

Mr. Brennan told the Citizen the information was brought to his attention just hours before Monday's meeting. He admitted he had not yet had an opportunity to discuss the issue with Police Chief Wayne Kalinski.

While there was a notion amongst some members, notably Mayor Brown, that the Nov. 25 vote should stand, others were seen to be quietly discussing their options with one another.

Coun. Debbie Sherwood, who last week made the initial motion to have the vote on Nov. 25, and Coun. Joe Andrews in particular were seen to be having words.

“I am very concerned about what has been put before us tonight. I am in favour of delaying for another week,” Coun. Sherwood stated. “I think we're rushing ourselves too much to commit to making a decision (following this new information) seven days from now.”

It was confirmed that the policing consultant, Mr. Hambides, would once again be on site at one of the two scheduled Council meetings slated for next week. Council will gather on Monday (Nov. 25) and Tuesday (Nov. 26) to kick off its 2020 budget deliberations.

While there was considerable concern on Monday, something Mr. Brennan seemingly attempted to alleviate on multiple occasions by noting he had not yet clarified this new information with OPS officials, it was, essentially, put to rest on Tuesday when Deputy Police Chief Leah Gilfoy distributed a drafted response to the previous night's commotion. In that release, Ms. Gilfoy labelled the information presented to Council “erroneous”.

“In May 2019, the Town of Orangeville planning department hired a consultant to assist them with a background study into development charges within the town. In the report, the consultant proposed an overall increase in population, housing and business growth for Orangeville. With respect to service levels, the consultant built in capital costs for a town-wide development charge calculation including police, fire, ambulance, transit, water and other services,” Ms. Gilfoy stated.

“The consultant advised that OPS was eligible to receive payment of $255 per capita, or a total of $1.6 million, over the next 10 years,” she continued. “It was determined that if the allotment of $1.6 million did in fact come to fruition, use of the funds by the police service would include replacing three existing older vehicles, purchasing radio equipment for the three vehicles, and purchasing uniform equipment for seven existing officers. Staffing level changes were never considered with respect to these potentially allotted funds.”

Deputy Chief Gilfoy went on to clarify, again, that the report was commissioned by the Town and was not, at any point, supported or endorsed by OPS.

“The report was not instigated by OPS, and the $1.6 million allotment was at no time an ask by the police service. This report is not a report from our police service and does not affect our budget. I was forwarded this report for the first time (on Tuesday) morning,” she noted. “OPS welcomes the opportunity for Council to review the development charge study to clarify any misinterpretations brought forward during (Monday's) council meeting.”

Council now has an extra week to digest the information, before casting a vote on the future of policing services in Orangeville on Dec. 2.