Local racer named Rookie of the Year in first season 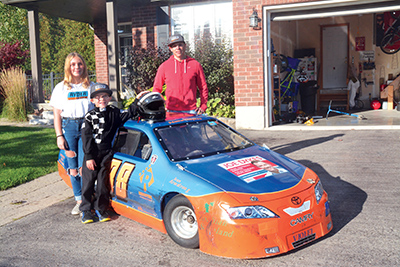 In his first season on the race track, ten year-old Orangeville resident Ryder White went from being the new guy on the oval to finishing the season as one of the top five points earners in his class at Sauble Speedway and sixth in points at Varney.

The Spencer Avenue Elementary School student drives in the Junior Late Model class and competed at Sauble, the Full Throttle Speedway at Varney, and Grand Bend Speedway over the summer.

He was only nine years old when he raced this past summer.

The Junior Late Model class is for drivers ages seven to 16. The cars are a scaled down version of a NASCAR type car and reach speeds of up to 60 mph.

Unlike a lot of racers, Ryder doesn't come from a racing family.

He developed an interest in the sport after watching NASCAR on television and seeing the Junior class cars at the racetrack.

When he expressed an interest in actually racing, his dad Mike asked him if he was really committed to giving it a try. Ryder assured him he was, and a new racing team was born.

“I always watched racing and decided I wanted to do it,” Ryder said of starting out on the track. “I watched NASCAR on TV. We used to go to Sauble just to watch the races. I wanted to race for three years. My dad kept saying ‘no' but this year he said ‘yes.' My first race I didn't really know what I was doing.”

Learning to race means getting out there and doing it. Racing provides no real training schools for new drivers. The attitude is drivers just need to get out on the track and drive.

They can learn how to drive by practicing at some tracks.

“ You have to text the owner of the track and see if you can go,” Ryder

explained. “At Varney you have pay

$25 and you can practice. My first race was at Varney – it's a bumpy track. I was really nervous so I stayed on the inside.”

At first dad Mike was unsure if rac

ing was the right path at such a

“This past year we asked if this was something he really wanted to do,” Mike explained. “So we started

He spoke to other people that had

kids on the racing circuit. They bought a car and the White racing team was underway.

The first few times on the track

Ryder had to learn the nuances of competitive driving and where he should be on the track when surrounded by other cars.

His first few races he was getting lapped by more experienced drivers.

“He had never driven anything,” Mike said. “Not even a riding lawn mower. We let him practice. We went out to the track for the first time and took the body off in case he hit the wall. I asked the track owner if he should come to learn what the flags mean and the etiquette of racing. He said ‘no, he'll figure it out.' He went out and spun out in the second corner and went down into the infield.”

Mike was obviously concerned about Ryder being on the track with experienced drivers.

In one early race he hit the wall causing some damage to the rear of the car, but that seemed to be a turning point as well.

“He was second last in points, then about half way through the season, right after accident he decided he was ready to race,” Mike explained. “He moved up six positions in the standings. By the end of the season kids where trying to beat him.”

Drivers compete in two heats on race night to determine their position in the starting line-up for the feature race.

Ryder said he plans on competing in the Junior Late Model class for a few years then plans to move up to the next level.

The White racing team is looking for local sponsors who will put their name on his #88 car and help with the cost of running the race team.