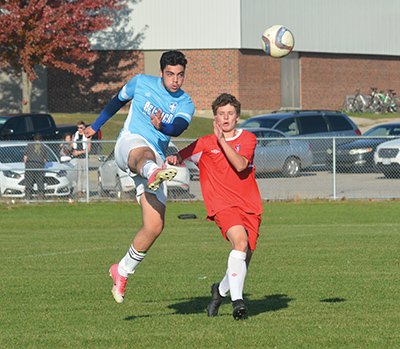 The squad took their first lost in the final game when they gave up a 4 -3 game to the Bishop Macdonell Celtics on Tuesday, October 8.

In that game the Bears missed a couple of goals, hitting a post then placing one off the crossbar on a shot on an open Celtics net.

The Bears will be the number one seed going into the playoffs.

The Bears scored 22 goals over the seven games while allowing 11 against.

“We use our pace well,” said Bears back, Nathan Tran about the teams success over the season. “All together our team works really well. We've got really good wingers and have a good pace.  We're good at passing.”

Tran said the team may not have taken the final game all that seriously as they had already clinched first place.

“At the start of the game  we weren't really taking it too seriously because this game really didn't matter because we're 6 - 0, so we already clinched a playoff spot and first seed. We let up on the gas a bit and they scored on us.”

The squad got a little more serious in the second half of Tuesday's game scoring twice to close the gap.

The team can't take the next game lightly as they go into the playoffs.

“Now we've got to train really hard. We have to take it seriously.  We've got to work on everything mental because we get a lot of cards because we talk alot on the field,” Tran said.

The Bears will be up against Guelph Collegiate Vocational Institued in the quarter final round of the playoffs.

The District 10 playoffs will go through a quarter final round, and a semi-final round to determine who will go to the District final.

The playoff schedule has not yet been announced.