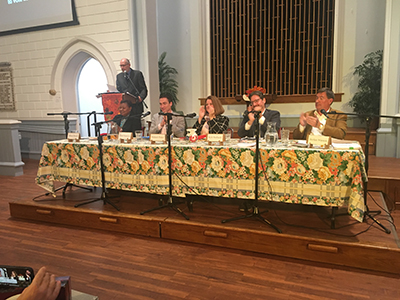 The minutes speed by until the Oct. 21 federal election, and under the Better Ballot Policy on debates, answers to questions are strictly timed and the red light means “stop talking, it's someone else's turn.”

Thus candidates were kept on an even keel, able to be as clear as possible with their sometimes foggy, even pandering official policies and their personal points of view.

Stefan Wiesen garnered the most approval from the attendees, with his Green Party's clear vision of how determined people need to be to really make a difference, while outlining practical solutions.

It should be noted here: however much the Better Ballot assured the overall polite demeanour of the participants, it has to be said this was not so much a debate as a Q and A. Inasmuch as there was no provision for rebuttal, questions were posed and responses were primarily scripted. So, while the Better Ballot system eliminated attacks and over talking, it also killed the fire that makes such actual debates more interesting and, in some ways, more informative. It would be good to see one last debate with the Better Ballot re-thought and rebuttal permitted.

This event was hosted by Climate Change Action Dufferin/Caledon (CCA-CD).

Allison Brown was asked to begin, which she did in French then proceeded in English to explain that she has been a nurse for 30 years. “My parents sacrificed a lot to move to Canada and I am happy to serve as best I can. There are so many issues around climate change.”

With a note of irony, Chad Ransom remarked, “You're wondering why I'm here. I don't believe there is a crisis and I think we have longer than ten years to sort things out.” Looking around at the church, he said, “I was christened here. I'm here because I want to make sure everyone is taken care of.”

Michele Fisher opened by saying, “I was part of the campaign that stopped a pit from being developed [in this area] years ago. I have a long-time commitment to the environment. I'm convinced we have a serious ambition for the environment.”

Kyle Seeback opened his remarks by emphasizing, “We have to leave a greener, cleaner planet for our children. It's essential that we take this campaign globally.” Mr. Seeback and his family moved to Orangeville in 2009.

Stefan Wiesen, who came to Canada from Germany in 1993, got his Canadian citizenship and has been active in the community as a matter his life's interests. He began his remarks with, “There is a lack of political will-power to make the changes needed.”

There were four set questions, plus three “local” questions, and then, such as time allowed, questions from the audience written on cards and present by the moderator.

Moving briskly on, to the first of the pre-written questions, its subject was climate change and how each party planned to meet Canada's international obligations to reduce Green House Gas pollution.

First to speak was Mr. Ransom, “I do not believe in the climate crisis but I am interested in seeing people practise what they preach.”

Basically, planting two billion trees, building infrastructure for electric vehicles and cutting corporate taxes for those companies showing strong green initiatives, were the beginnings of the Liberal plan, according to Ms. Fisher.

In his turn, Mr. Seeback stated that Conservatives mentioned the Paris Climate Agreement that, according to the parliamentary budget office, Canada has not achieved its goals to date. “We would invest in green technology. There's new technology with steel; eliminating carbon in steel production. Enforce regulations against big emitters; protect green land and take this globally, especially against China.”

It is the bickering about the subject that bothers Mr. Wiesen: “We need to focus, all hands on deck, with no partisanship. There needs to be stringent targets.” He opined that not all countries can be leaders but that Canada can lead, as we have done with peace-keeping.

“The national electrical grid needs to go across the country, east to west,” said he.

Ms. Brown told us that the NDP have a bold climate plan that will create 300,000 jobs. She talked of encouraging electrical vehicles. “Dufferin-Caledon has seen the negative effects of flooding. We'll be working with communities,” she promised.

Next up was a question about water. With the longest coastline the world, half the world's fresh water lakes and “roughly 10% of the world's wetlands;” and with the re-emergence of pollution “hotspots” like Lake Erie, the question asked what policies were in place to work with different sectors of the country to reduce water pollution and the risk of floods.

Ms. Fisher was first on for that, talking about the proposed investment of $2 billion to cover 36 projects to upgrade water plants.

Mr. Seeback kept it short by saying there had to be no more waste going into water.

However, Mr. Wiesen was ebullient; “Why now?” he asked. “After all these years of allowing industry to discharge industrial waste into water – the equipment to clear water exists – this is the Green plan.”

The Bill of Rights about water was Ms. Brown's handle on the subject. She maintained government has to work with communities and felt it is important to monitor Canada's flood maps.

Mr. Ransom spread his hands and said, “This is the headwaters for the most rivers in Ontario. It's common sense,” says he, “not to dump waste into the water. I think there should be a tax rebate for properties with a wetland that is properly cared for; the wetlands are the responsibility of the landowners.”

On to the third question about wilderness conservation, prefacing it by, according to a recent study, 50% of Canadian wildlife species are in decline, asked what the parties planned to do the protect the quality and quantity of Canada's wildlife and wilderness.

Mr. Seeback grew up, as he told us, camping in national parks. The best ways to protect national wildlife and wilderness areas and wetlands, birds, is by community-led restoration, with new funding for community based programs.

“They are the best to help conserve nature,” was his reasoning.

A ruffled but polite Stefan Wiesen put it, “As much as I pledged not to, we have already heard from scientists but here, only the federal cabinet can declare the numbers of endangered species. We have to encourage better farming practices, biodiversity. Take a little of the province for natural parks.”

Ms. Brown noted the alarming rate of decline. “We have to begin now,” she averred, “commit to protect nature. We need 30% by 2030 of reforestation, supporting indigenous rights, expanding protected ocean areas.”

“What is being done for healthy colonies? It's the personal responsibility for people to care for the wildlife on their property. For properties with four unused acres of wilderness, there should be a land tax reduction.” was Mr. Ransom's opinion.

Boosting the Liberals' efforts so far, Ms. Fisher told the assembled, “14% of the ocean is protected ... 25% of land by 2025. We want our kids to protect the land. They should experience nature. We'll fund camping for children.”

The fourth question raised the ugly subjects of pollution and toxic substances. In spite of rigorous legislation in years past, reducing such dangers as coal, lead and DDT, the Canadian Environmental Protection Act (CEPA) has not been updated in 20 years. Given that many more substances have come into the public arena with pesticides and chemicals in prepared foods, showing ill affects on the health of citizens and costing millions in health care, candidates were asked to claim whether they would commit to protect Canadians from these toxins and update the CEPA.

Taking up the mantel, Mr. Wiesen was firm, “Any company must prove chemicals in their products are not harmful. The Green Party is fiscally responsible – getting rid of toxins reflects savings in health care.”

“Environment and people must be protected,” Ms. Brown remarked. “The law hasn't been undated since 1995. Water bottles and cans - there needs to be a deposing them.”

“The Liberal party is set to reform the Environmental Protection Act; eliminate coal, reduction of mercury and ban single use plastics. The Liberals banned asbestos,” Ms. Fisher assured the meeting.

Technology and globalization of the problem is the mantra of the Conservative party, as explained by Mr. Seeback. “New investment in technology bioreactors. All emissions can be absorbed.”

What followed were three local questions: the first: what are your three top priorities for helping with climate change?

Ms. Brown offered her regrets for not having policy answers except to say, “The resources are there and the knowledge. We have to use them.”

Sitting next to her, Mr. Ransom explored cleaner living, good use of technology, and a tax rebate for owners of four acres left for wilderness.

She said, “We'll plant trees and use climate change technology.”

There was real progress on a certain matter from Kyle Seeback, “We need to take advantage of technology. Steel production accounts for 20% of global emissions.

“It's absolutely essential that we go global with India, China and Russia, get them increasing their efforts.”

The Sinatra test was brought forward by Mr. Wiesen, “Pipelines, fracking has to stop. Only then can we make any progress. (to great applause). Then, renewal of natural water and lands. [Finally] Dealing with food waste and taking a wholistic approach.”

The subject of 5G came up next to minimal comment by most of the candidates.

They generally agreed that the scientific answers were not in but that the high speed internet 5G would bring was attractive. There are issues of concern, some admitted.

Inevitably, the Trans Mountain Pipeline came to the table.

“Did you drive your gas-powered car here?” Ms. Fisher demanded of the crowd. “We depend on oil and gas. The pipeline is safer than train or/and truck and we have strong plan for environmental protection.”

Mr. Seeback was forced to agree completely with her adding, “We have to find a way to marry these two – the tar sands with lower emissions.”

Neither mentioned that the Trans Mountain Pipeline has nothing to do with gas in Canadian cars.

Mr. Wiesen did not agree: “A hard no! Mr. Trudeau had to buy the pipeline or the government would have been sued by the industry. But he should have said, ‘we made a mistake and let's move on.' We can't just shut the tar sands down; we have to slowly fade it out by replacing it with green energy.”

In summing up, Allison Brown referred to her “honesty and willingness to serve.”

Chad Ransom is a “home town boy” for freedom of speech and compromise, wanting to make Canada a “better place to live.”

Michele Fisher predicted five to ten years when it will easier to other options for driving and the plan to pass “hard five year milestones that future administrations cannot undo.”

Kyle Seeback hoped his interest in the environment had surprised people and mentioned A Red Plan.ca to read the Conservative environmental proposals.

Stefan Wiesen offered simply, if people wondered who to vote for “Vote with your heart; science has your vote.”