Headwaters hospital commits up to $37,500 to fix fencing problem 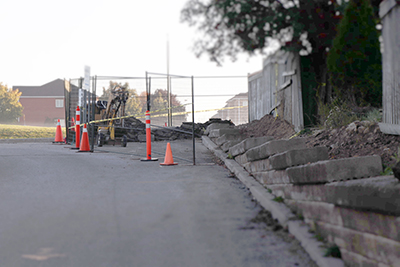 Headwaters Health Care Centre is doing its part to be “good neighbours” after committing to investing up to $37,500  to fix a lingering issue on their property that has impacted fencing at properties along Jay Crescent.

Informing the Citizen of the situation earlier this summer, local resident Ryan Booth expressed his concern about the deteriorating condition of backyard fences in the area. After purchasing a home in the subdivision in 2017, Mr. Booth admitted he was surprised to see this was such a widespread problem, with some of his neighbours allowing their fences to completely fall down and, seemingly, doing nothing about it.

“I spoke to some of my neighbours and other residents and they said this is something they had been dealing with for the last five years at least,” Mr. Booth said. “Gradually, the fences deteriorated over time. They had been neglected by the residents and by the hospital.”

There had been a long-standing debate between residents in the area and the hospital over who, exactly, was responsible for the upkeep of the fences. When a windstorm ripped through the community in June of last year, that served to worsen the problem, with many of the fences in the area completely destroyed. Some residents sought to fix them, propping the fences back up. Most left them where they lay.

Mr. Booth attempted to connect with the hospital to find out what responsibility, if any, the facility had to maintain the fencing. He had trouble finding the right person to talk to. In the end, he turned to Orangeville Council to help him out. Coun. Todd Taylor stepped in, acting as something of a mediator. He put Mr. Booth in touch with Tom Kovendi, the hospital's property manager. The two have been working on a solution ever since.

“What really is driving this whole thing is the fact that we want, and we're trying to be good neighbours. We're trying to address a situation that arose and has developed over the last year or two. We're trying to keep everybody happy, that's what this is all about,” Mr. Kovendi stated.

Referencing last summer's windstorm, and apparent attempts by community members  to have the hospital take care of the situation, Mr. Kovendi admitted he believed this was something the homeowners would take care of themselves.

“The windstorm knocked down a number of fences, or damaged some of them. At that particular time, we looked at it and wondered what obligation we had,” Mr. Kovendi stated. “We assumed, correctly or incorrectly, that each property owner would have property insurance to protect them. Simply said, only two people approached us about their fence and asked us what to do… We figured it was an insurance claim and left it at that.”

Following further discussion, a term highlighted in a 1997 site plan agreement when the hospital was first constructed dictated the hospital had some responsibility for maintaining the fencing in question. Once that was brought to Mr. Kovendi's attention, he came up with a plan to fix the problem.

While the windstorm and years of neglect certainly didn't help with the condition of the fencing, the potential root of the problem lay with a retaining wall on the hospital's property that was showing signs of giving out.

“The retaining wall is somewhat of another issue. One of the first things I did when I took over the property last year was I looked at the condition of various components of the property and our buildings. I noted then that the retaining wall was leaning and, sooner or later, it needed to be addressed,” Mr. Kovendi said. “In January of this year, we did an extensive building assessment study of the whole property. At that time, expert opinion stated the retaining wall needed to be addressed because it would become a safety issue sooner or later.”

The hospital has since committed $25,000 to completing the repairs to the retaining wall, while they have negotiated a price with their contractor to install 50 new fence posts at a cost of $250 per post, to fix the longstanding fencing issue. Work to complete the panelling between the fence posts would be left to the local residents. Mr Kovendi estimates the retaining wall project will be complete by the end of October, while, if the hospital can come to a quick agreement with the residents, the fence posts could potentially be installed before the winter frost sets in.

As for Mr. Booth, he's hoping the hospital will be able to complete the project this year.

“This is a security thing for me. There's a lot of foot traffic in and around the hospital, I don't want people having access to my backyard. I want it safe and secure for my kids. I've done some patching up, but it would be nice for this thing to be finished,” Mr. Booth stated. “Some of my neighbours and I have talked about getting together and having a framing party of sorts. We want to make sure the fencing is consistent and unified.”

He added, “In general, I think myself, and other residents in the area, are just happy to see some movement on this. Some of these people have lived here a long time and didn't think they'd ever see anything happen, so I'm happy to see progress has been made and the hospital has committed to finishing this off.”