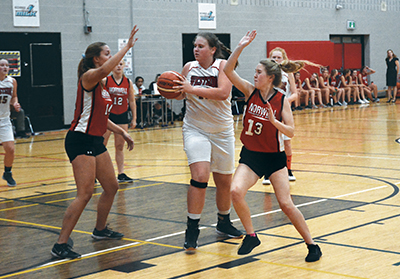 The District 4 girls basketball season has started and in the early going the Thunder from Westside are looking pretty strong on the court.

The senior girls team won their second game on Monday, September 30, when they bested Norwell Secondary School 42 – 2 in the gym at Westside.

The Thunder came out strong in the game taking an early lead and keeping up the pressure for the entire game.

On offence they had a successful strategy of setting up in front of the net and had a good shot / score ratio.

On defence the squad was successful in keep Norwell pinned to the outside and forcing them to take shots from farther out than they probably wanted to.

The Westside senior team played their season opener on September 25, when they travelled to Mount Forest to take on Wellingon Heights

In the opener the Thunder left the

That gives the Thunder 77 points scored over the two games and second place standing.

the standings with 108 points scored

The Thunder will be back in the gym at Westside on Monday, October 7, to host Erin District High School.

have only played one game on the schedule so far but they opened the season with a win.

Both teams played a solid four quarters with Westside moving ahead and taking the win in a 30 – 24 game in their first outing of the season.

The Thunder played their second game of the season against Emmanuel Christian High School on Wednesday, October 2, in Fergus. Results were not available at press time.

The Junior Thunder will play their home opener on Monday, October 7, in the gym at Westside.