Theatre Orangeville season to open with Come Down from Up River 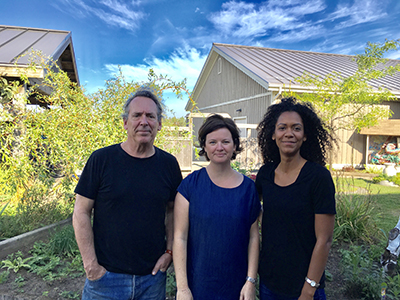 Opening October 17 and running to November 3, Norm Foster's play, Come Down from Up River, poses many soul-searching questions amid the Foster laughs. How much of a mistake is it to carry a bad opinion of a person indefinitely or cling to misconceptions, including those based on stereotypes?

This is the thinking behind this much-anticipated play to kick off our season of entertainment at Theatre Orangeville. Having premiered at the Foster Festival in the summer of 2018, Come Down from Up River introduces us to a couple of ladies in love with each other, who live in Saint John, New Brunswick, a region of Canada near and dear to Mr. Foster's heart.

The ladies are Bonnie Doyle and Liv Arsenault. Performed by the delightful Joella Crichton, Liv is from Ottawa and they two met in Montreal at a hockey game. Having, in due course, established a romantic attachment, Liv, an artist coming from a “position of privilege,” nevertheless opts to move to Saint John with Bonnie, who has a busy life as a lawyer there.

Naturally, Saint John is not as cosmopolitan as Ottawa and Montreal and, by inference in their conversation, there has been reaction not only to their relationship but also to the fact that Liv is a coloured person.

Into this, is news of a proposed visit from Bonnie's Uncle Shaver Bennett. Shaver was estranged to his sister, Bonnie's mother. So, Bonnie is not pleased at the idea of seeing him again. Shaver was born and raised in the forests of New Brunswick. He has lived all his life in the woods as a logger. “A logger – worked at the mill for 42 years.”

Said Robin Schisler, playing the part of Bonnie, “We presume he'll bring all the ignorant, homophobic, racist ideas with him. He's visiting from up river.”

The Citizen was sat in with the three actors of this piece and Director David Nairn taking the opportunity to discuss the ramifications this play presents of how to let drop old prejudices and be open to reconciliation.

For his part, Neil Foster (no relation to author of the play), in the role of Shaver Bennett, suggested that perhaps the isolation of the uncle's life in the wilderness gave him surprising insights, more than might be expected.

“If you believe your prejudices, how much do you miss?”

From Ms. Schisler, “We've lived in a place where we all look the same. Bonnie is strongly protective of her wife.”

“This is also a very funny play,” commented Mr. Nairn.

He added too, “I know this play will generate conversation. We've never had that discussion on our stage before.”

The reflections the play give rise to how they continued: “Whatever you're talking about – it's all about information.”

“It's easy to stay in that ignorant place.”

“We can have misconceptions about others when they're still the unknown.”

They talked about racism coming even in the form of: “So, where are you from?”

“Yes, but where before that?”

Looking for “Jamaica” or the like, even after two or three generations in “Toronto.”

Said Ms. Crichton, “My way of processing that, is by bringing an open, kind nature- show the world who you are as a person.”

This is Ms. Crichton's first appearance at Theatre Orangeville. She comes to us, a graduate from York University's Acting Conservatory and Factory Theatre Mechanics. Ms. Crichton has theatre, television and film experience and she has been nominated as Best Supporting Actress by Broadway World Award and My Entertainment World.

Theatre Orangeville is welcoming Robin Schisler, after her appearance in last season's World Premier of Off the Grid, as Marty. Also on the main stage here, she played the title role in Anne and was in A Christmas Story, along with a large number of other theatre performances, including a Dora nomination.

Having won a Dora Mavor Moore Award for Best Performance in a Musical, Neil Foster has been doing plenty of theatre, film and television He even admits to having acted here too, in 1997.

Their recommendations for filling the theatre to see this funny, interesting play, are that you'll laugh and you'll cry – we can trust Norm Foster for that.

“This play challenges you to look at some things differently.”

“It doesn't go where you think it's going to go.”

Come Down from Up River opens October 17 and runs until November 3 at Theatre Orangeville. Tickets and subscriptions may be purchased at the Box Office at 87 Broadway and the Information Centre on Buena Vista Drive at Highway 10; by telephone at 519-942-3423; online www.theatreorangeville.ca

You might like to remember the Victorian Christmas Gala, set for Saturday, November 16, the best party ever, year after year. Tickets, by telephone and online.