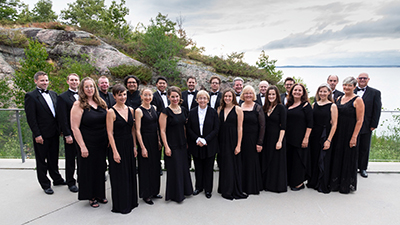 The famed Elmer Iseler Singers and conductor  Lydia Adams are coming to do a workshop and concert with local singers at Westminster United Church on Saturday, October 5.

Here's how it works: Local singers are being invited and may or may not join the Singers at the church for a workshop and rehearsal of three new songs which they could perform with the EIS later in the evening concert.

“We're capping it off at 80 singers,” said Ms. Adams. “This is really nice as well, this is a fundraiser in support of the church's capital campaign for their renovations of the building. They've just completing their fully accessible [commercial] kitchen. It is a place of worship but this workshop and concert is not only for members of the church. It's open to the whole community. ”

She thought a bit about how long it has been since the EIS has been to Orangeville. She began, “It was at the theatre and we were thrilled to be there, such a historic building. Of course, personally, were up in Orangeville all the time. There are such good shops and nice restaurants, the Island Lake. It's a real historical connection between EIS and Orangeville. Elmer lived in Caledon for many years.

“This concert,” she said, “is one of 20 appearances the Singers are going to be making just in the fall.”

Indeed, as their brochure outlines, they are travelling doing single performance concerts in many Toronto locations and around Ontario. In the spring they are returning to the western provinces with several stops in Alberta and British Columbia.

Me. Adams gave us an idea of some of the home and travelling concerts to come, “The day after Orangeville, we're with guest singer Alexa Louie at the Koerner Hall.

“Then we're performing with the Thunder Bay Symphony and in seven other towns and cities.”

Next “is the first series concert, celebrating the 40th Anniversary of the Festival of Sound. It's all about Perry Sound, the strength of the rocks there.

“We're doing a wonderful Messiah in the Yorkminster Park Baptist church, a Spirit of Peace about reconciliation with a youth choir. Finally, we sing with the Elora Singers in the spring. And we have a busy schedule in the spring as well,” she told us.

“These are all different programs. We like to tour Canada. There's not that many choirs doing national tours. We're also putting together an educational program, focussing on conducting.”

Considering that many of the Singers also have full-time careers, this is all very ambitious.

“We love that they're so dedicated,” she commented. “I think they really love being together and singing together. It's a special team of great friends. They make music magic happen.”

She continued, “What we're been doing when we go up north is the same as we're doing in Orangeville. We discovered that it [Orangeville] is a great place for the choirs that take part and the organizers of the events. Plus, for audiences, the choirs bring family and friends. We're always thrilled the houses are packed.

“There are wonderful local singers that we can work with and we get wonderful letters and emails what this has meant to them. It's a plus on all counts.”

Personally adding her years with the singers: “I've been 21 seasons conducting the Singers and been involved for 35 years.”

All those years ago, Elmer Iseler was in Nova Scotia, where Mr. Iseler heard her playing the piano and engaged her to be the accompanist for his choir, enticing her to leave Nova Scotia and come to Ontario.

“I came here to work with the choir [in 1981] and Elmer. It was a fantastic experience playing with a master conductor. You're learning al the time. Elmer had a way of getting to the core of the music; make it special, never looking at music the same way. You're always looking for something extraordinary in the music – he was a genius.”

She reflected, “Not everybody has the chance to work with such a great musician.”

Speaking of working with great musicians, you can sign up for this workshop on October 5 through Westminster.

“It's important for people to sing so we can accommodate to have enough music. We have to cap at 80 people, according to how space there is and it's open to anybody that wants to come.”

Giving the planned schedule, she told us, “There's a warm-up first, looks like we start at 3:30 p.m. and go to 5:30 p.m. For the concert, we start with all the Orangeville community singers (that is those of you who come). Choral prelude – I wanted the organ voice included in the program. It's a beautiful instrument.

“The music is a wide view of life, beauty, the idea of beauty; ancient melodies. A chant, a reflection of light coming from all over the hall.

“It will be wonderful.”

To sign up for this singing experience with the Elmer Iseler Singers and /or come only to the concert, please contact the office (secretary, Mrs. Sheedy) at the church, 247 Broadway, telephone 519-941-0381.