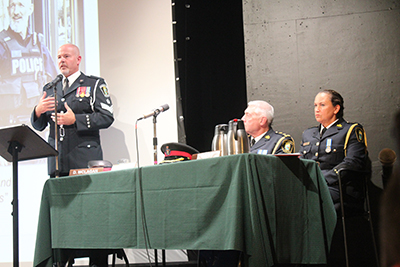 If the back-to-back Town Hall sessions that occurred earlier this week were anything to go by, the vast majority of the community is firmly behind keeping the Orangeville Police Service (OPS) as a review into the future of policing services in town continues.

On Monday and Tuesday, Orangeville Council welcomed local residents as members from both OPS and the Ontario Provincial Police (OPP) held two-hour question-and-answer sessions in the Orangeville Opera House. Representatives from each side were afforded the opportunity to address those in attendance, before fielding a wide variety of questions from the public.

First up, on Monday, was the OPS. Chief Wayne Kalinski was joined by Deputy Chief Leah Gilfoy and Staff Sgt. Dave McLagan on stage, where the trio provided year-to-date statistics relating to OPS' performance in the community so far in 2019.

Currently, OPS provides approximately 60,800 police service hours to the community on an annual basis. The force boasts 42 uniformed officers and 30 civilian staff members. In 2018, OPS responded to just under 22,000 calls for assistance within the town.

Mr. McLagan noted that Orangeville currently sits comfortably within the top 20 percent of safest communities in Canada, according to the nation's Crime Severity Index. Locally, according to surveys carried out by OPS staff, 86 percent of citizens are satisfied with the level of service the force is providing in Orangeville and feel safe.

While there are few in the community who question the quality of service provided by OPS, it's the cost of that service to the taxpayer that has brought about this very discussion. Referencing the service's budget over the past five years, Mr. McLagan stated Orangeville was unique in the sense it has been able to hold the line on spending increases since 2014.

“Our net budget was $8.2 million in 2014. That same budget has been lowered to $8.1 million in 2019,” Mr. McLagan stated. “And we're not only meeting our budget, but we're coming underneath it with some regularity. In total, we have returned more than $800,000 to the town over the past five years. If you were to ask if any other police service in Ontario has done this in the past five years, the answer would be no. I would say that no other department (in any police force) has managed to do it. We get it. We know that fiscal responsibility is key for us in continuing to police the community.”

The primary reason OPS has been able to function on a zero percent budget increase over the past five years is the significant increase the force has seen in its revenues. OPS is now making, on average, more than $500,000 per year through its third party criminal record check service – something Mr. McLagan feels is “huge” for a venture launched just four years ago. Tying into those revenues, OPS also allows local fire departments, EMS and the Shelburne Police Service to tap into its radio frequency, which brings in an additional $100,000 per year.

Addressing the elephant in the room, Mr. McLagan informed Council, sitting in the front row, that if they were to disband OPS in favour of transitioning to the OPP policing model, it would come at a significant cost to the taxpayer.

“There are some harsh realities and tough decisions coming in the next few months. I'd like to put a face to those realities,” Mr. McLagan stated. “Severance costs alone – we have about 69 employees. We looked at Midland and Espanola, who recently transitioned to the OPP – around 20 percent of their officers weren't transitioned. The costs that come with that would be a burden to the municipality. It's a number, a real number and it's something that will impact citizens here.

He added, “If we were to stay, there are no start-up costs or building renovations, no tax increase or depletion of municipal reserves. I would implore you not to mortgage our future with this decision. I ask you to give us a chance to build on our revenue streams and challenge you to push us to see what we can do with our business.

“You have seen evidence of our fiscal responsibility. You know what we can do. I don't say that because of what we've done over the past five years, I say it because of what we have done over the last 155 years. If it works, I don't know why we need to fix it. We love our service model, we're very proud of it and we'd like to have the opportunity to continue to serve citizens and continue to do what we do here in Orangeville,” Mr. McLagan concluded.

Below are what we consider to be five of the top questions posed to OPS members on Monday evening.

Q: Trevor Castiglione – How many times does OPS have to assist OPP for out-of-its-area calls because there are no OPP officers available?

A: Wayne Kalinski – OPP and OPS work hand-in-hand. We will assist them whenever they require us to do so. I don't have the statistic in front of me, but it is something we track. We are police officers for the province of Ontario and we share the opportunities to work with one another. Calls in and around Orangeville would very easily be deferred to us if they request that.

Q: Jennifer Beauregard – Currently, we have a chief and a deputy who are present in the community 24/7. You guys work all the time and I see you everywhere. For the OPP, they will have to split time with other communities because they won't just be policing Orangeville. My question is, if we go to a larger force like the OPP, would we see the same presence from (the detachment commander)?

Q: Tina Hinsberger – While I personally do not believe there is a need for cuts in policing, I believe we have a fiscally sound police service and am very happy to contribute to that, have any other towns approached OPS to maybe amalgamate if was that need, either now or in the future to save some money?

A: Wayne Kalinski – Amalgamation is always an option. We respond back to what the decision of Council is and our police services board (PSB). It is strictly a political decision, but if you're asking me if we are capable of increasing our footprint in Dufferin County, we are more than capable. We have infrastructure in place. We have great infrastructure. But this is not our decision – we rely on Council and PSB to make that decision to tell us how they would like to proceed.

Q: Noel Ramsay – In our last tax bill, there was a footnote saying 23 percent of our municipal tax bill is for policing services. I made some calls to a few other municipalities – some small cities, large towns as well as other rural municipalities. Generally speaking, they all came back saying the cost of policing is around 16, 15, 14 percent of their municipal taxes. There are 290 municipalities in Ontario that OPP cover, with one million properties in those municipalities. Their average cost is $359 per household. Using (OPS' operating budget) of $9.96 million, that's without revenue, the cost per household in Orangeville is $1,011. After revenue is applied that comes down to $822. Have you ever looked at your costs and other police departments to find out why your costs are so much higher than theirs, because that's what everyone is trying to figure out?

A: Wayne Kalinski – In order for me to give you a fulsome answer, I would have to consult with the treasury department to find out the actual numbers that Orangeville uses. I can appreciate that some people think it is more expensive in Orangeville. I understand that. I'm in need of some additional information from treasury in order to make an informed response to you.