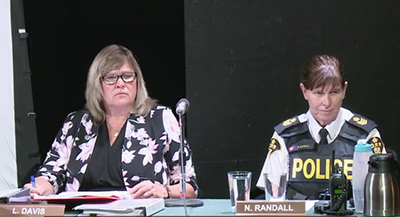 The latest OPP costing proposal process in Orangeville is “a matter of dollars and cents” according to Linda Davis, a contract analyst with the provincial force.

Ms. Davis was joined by Dufferin OPP detachment commander Nicol Randall on Tuesday evening as the pair made their pitch to take over policing services in Orangeville.

“This is not about service levels, as both OPP and OPS have proven policing experience. Both provide, at a minimum, adequate and effective policing as required by the Police Services Act,” Ms. Davis began.

“OPS is a stand-alone policing model. It's an excellent model, but it's also a very expensive model. Every municipality is faced with increasing budget pressures and must scrutinize their programs and services in attempts to provide those services in the most efficient and cost effective manner.”

A new proposal from the OPP to take over policing services in Orangeville was delivered to town staff on June 10. During a previous OPP costing, which was considered and ultimately turned down by Orangeville's previous council in 2017, it was estimated that the Town could eventually save as much as $4.3 million per year by accepting a contract with the OPP. However, the provincial force would not stand behind those projections, causing some concerns throughout the community.

During a presentation to Council earlier this summer, Ms. Davis noted Orangeville would serve a three-year transitional contract upon signing with the OPP. The OPP would gather data over that three-year term, which would be used to develop a longer-term contract with the town. That is all part of the OPP's new billing model, which was unveiled in 2015.

Under that new billing model, policing costs are separated into two categories, Base Service and Calls for Service.

The formula that decides Base Service cost is consistent among all 325 municipalities the OPP currently provides services to. According to Ms. Davis, a municipality's Base Service rate is based on the number of properties in the community. Activities covered under that Base Service cost include legislated activities (which includes crime prevention, officer availability to respond to calls 24 hours a day, general and directed patrol and victim assistance), proactive policing (programs such as RIDE, traffic safety, community policing and intelligence gathering), officer training, administrative duties and all Inspector and Staff Sergeant positions.

There is a third component, which Ms. Davis described as Additional Costs, which covers overtime, court security, cleaning/ caretakers, accommodations, prisoner transportation and any other particular enhancements requested by a municipality. Some municipalities, Ms. Davis states, don't have any Additional Costs, while community's like Orangeville, which houses a courthouse and provides prisoner transportation, would see additional charges.

Ms. Davis declared that, in 2019, the OPP is set to recoup $410 million from municipalities policed by the provincial force. Of that, $216 million will come from Base Service, $156 million from Calls for Service and $38 million from Additional Costs.

Using data gathered through the OPP's Activity Reporting System, Ms. Davis noted that the average cost per property over the past five years for municipality's policed by the OPP has remained “relatively stable”, varying between $350 and $360 per property. For comparison, in 2019 the Orangeville Police Service is expected to cost approximately $864 per household.

On Tuesday, Ms. Davis noted the projected first-year cost for Orangeville should it engage the OPP would be $9.3 million, which includes all start-up costs. That number does not include any provincial grants or potential revenues the Town could collect, such as for traffic and parking tickets.

Every OPS officer interested in joining the OPP would have the opportunity to do so, providing they are “in good standing”, says Ms. Davis. While the provincial force does not currently track response times, Ms. Davis stated she was confident in OPP's ability to maintain the level of service currently provided by OPS.

She added, “The OPP is absolutely confident that we will be able to maintain the same response times you currently receive, due to the fact the Town will be its own separate zone and officers will be assigned by zone.”

Ms. Randall confirmed that one sergeant and six constables would be assigned to Orangeville at all times under the terms of a contract with OPP.

“The OPP is very experienced in community policing. We currently police 325 of Ontario's 444 municipalities on a cost recovery basis,” Ms. Davis stated. “In closing, I would like to suggest that Council does their homework on this issue. I know concerns are being raised with other municipalities currently policed by OPP – those with concerns, if they look at the numbers, will see (communities) are benefitting from the implementation of our new billing model.”

Below are what we consider to be six of the top questions posed to OPP members on Monday evening;

Q: Nick Garisto – I have seen other municipalities are considering, or have transitioned away from OPP service. Are you able to provide reasons for this, and are you in consultation with other detachments as to the reasons why?

Q: Anne Welwood – I have heard there are changes coming to the Police Services Act that would allow for amalgamation of several police services boards within a detachment area, potentially leading to less meetings and less local input. Right now, our chief and deputy chief are available right away to answer to PSB, would you be available?

A: Nicol Randall – Whether there's one PSB, or several, I'm happy to meet with them at the call of the chair. The minimum number of meetings you need to have is four per year, but there is no maximum to that. I would be answering the community, I answer quite often to different communities for the five different PSBs I answer to now. I'm at 15 to 20 meetings per year already, so would have no problem (attending more).

Q: Jennifer Beauregard – Mr. Ford announced in May he would be cutting $46 million from the OPP budget. How will that impact the service you provide to municipalities, will municipalities need to pay more to assist OPP with providing adequate service and what happens when the next Premier comes into power and decides to further cut your budget?

A: Linda Davis – I have no idea what will happen when the next Premier comes into service, and whether or not they will decide to cut services. As far as the more recent announcement made by Mr. Ford, this is not a unique situation for the OPP. We have dealt with budget cuts before, with financial constraints in previous years. As part of our ongoing efforts to be fiscally responsible, our two main areas for budget implications will not be frontline service delivery. We're looking at cost efficiency in procurements and 10 percent reduction in ODOE (other direct operating expenses) costs. That's one of the strategies we're looking at to manage those savings. The other is workforce efficiency.

A – Linda Davis – When we prepare the transition contract, we do talk about the number of officers that will be assigned to Orangeville zone. However, service is measured through hours of service. When we saw we're going to provide 42.58 officers, one officer is equal to 1,417 hours, so essentially we would expect to provide the town of Orangeville with (60,336 hours of service). We're able to measure that with data collected in our daily activity reporting system, as it tells us where officers are working and how long they're working for. What we'll strive to provide is the equivalent of 1,417 hours per FTE contract.

Q: Anne Welwood – There are a web of contacts OPS has in the community, whether it be Dufferin Situation Table, the Orangeville Food Bank or Family Transition Place (FTP). Is OPP willing to commit to that level of support, either on its own, or if it's asked to do so by the PSB. Community involvement is very important part of our policing in town.

A: Nicol Randall – Yes, we're already involved with Dufferin Situation Table, FTP, Dufferin Child and Family Services (DCAFS) and Guelph Wellington Mental Health Program. We're involved in many of these programs already. We're on the periphery of town, so it would not be difficult to do the things you're asking us to do because we already have those relationships established. Your officers who work here now, who we'd hope to hire on, already have those relationships too.