Temple, what temple? Amaranth man in dispute with Township 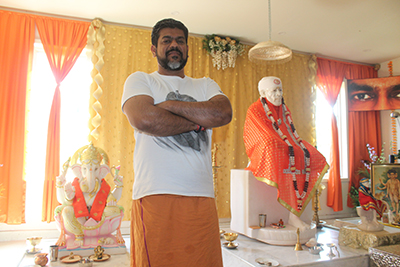 An Amaranth-based businessman feels like he is being forced out of his dream home after the local township branded his property a place of worship and demanded that any “spiritual” activities ongoing at the site cease immediately.

Mahesh Bhalerao purchased a 100-acre property along the Third Line (County Road 11) in Amaranth last summer. Having spent the past decade living amongst the hustle and bustle of the big city in Scarborough, Mr. Bhalerao sought out what he would describe as a “peaceful paradise” that he and his wife and two sons could enjoy and, eventually, move into on a permanent basis.

After months of searching, the businessman, who operates his own bulk import and export company, settled on the quaint property in Amaranth. The six-bedroom, four-bathroom property sits on a humongous acreage, which features a pond, multiple trails and a 1,200 sq. ft. shop.

“This really is our dream home,” Mr. Bhalerao told the Citizen.

Upon moving into the property in June 2018, the Bhaleraos made some adjustments to their new home. Chief amongst those was transforming what was a two-car garage into, as Mr. Bhalerao described it, a “personal altar”, designed by the family to pay homage to several Hindu deities. Mr. Bhalerao spent more than $100,000 on this particular renovation, which included purchasing and importing four large idols for placement inside the home and on the property.

Once that work was completed, Mr. Bhalerao held a house warming of sorts, inviting family and close friends to celebrate the purchase of his new home. Amongst those guests was Mohanji, a renowned spiritual guru and musician from India. While visiting, Mohanji helped to purify the property, performing a special ceremony to bless the Bhaleraos' new abode.

“It's a Pooja ceremony that we do, where we say thank-you to the house, to the local area and the greater community. At its core, it's a thank-you to Mother Nature for allowing us to be here and live the life we live,” Mr. Bhalerao said. “Normally, these events happen over one day, but because Mohanji made the trip over from India, we had it span over three days. It's something that only happens during the daytime, we have food, people come together and talk and chat, but it was never anything crazy.”

He added, “On the first day I had maybe 40 people here for a few hours, then in the days after that it was only family and my close friends – maybe 14 or 15 people. We weren't particularly loud, we didn't do anything late into the night and nobody, other than my family, stayed the night.”

Following that event, which took place from Aug. 23 to 26, Mr. Bhalerao was subject to a visit by an Amaranth Township bylaw officer. Somebody had, seemingly, notified the municipality that a religious ceremony had been performed at the site. Upon inspection, the bylaw officer, Eugene Lammerding, found that the renovated garage space violated the township's bylaws.

“They are saying this is a religious place, that it is like a temple and people can come and go as they please, which is absolutely not true,” Mr. Bhalerao said. “I consider this a personal space, it is my family's personal altar. We use this room to pay our respects, and if I have other family or close friends over, they may use it too.”

After being informed by Mr. Lammerding that, as far as the Township was concerned, the room is considered to be a place of worship, Mr. Bhalerao sought to come to a compromise that would allow him to keep things as they are. According to Mr. Bhalerao, the entire winter passed without a word from the Township.

As we entered into the new year, plans for the coming summer started to fall into place. Mohanji was due to return to Canada for his regular annual visit, and Mr. Bhalerao wanted, once again, to host him at his property in Amaranth. Wanting to play by the rules this time, he visited the Township offices on June 4 to find out what he had to do to ensure he wasn't violating any municipal bylaws. On June 7, Mr. Bhalerao received a letter from the Township informing him that a repeat of last year's event would not be permitted.

“This matter was reviewed at the Township of Amaranth Council meeting on June 5. Please be advised that the subject property is zoned Rural and Environmental Protection, which does not permit a Place of Worship,” the letter reads. “Therefore, your request to hold a spiritual event at your property, which would be attended by members of the public, is not a permitted use, and therefore cannot take place.”

It continues, “Further to the above, the use of your property for a Place of Worship must cease.”

Mr. Bhalerao's cause was not helped after his property was listed on Google as a ‘Mohanji Datta Tapovan', which is defined online as a temple. not just for worship, but for rejuvenation. Mr. Bhalerao insists he did not create that posting, nor did he create a Facebook page promoting last year's ceremony as a public event, and has sought to clarify the situation. He has ensured the Google listing reads ‘permanently closed', while disassociating himself from anything created on other social media platforms.

But, with this issue seemingly not going away, Mr. Bhalerao decided to put his property up for sale. He rented an Airbnb in Amaranth for his event, which took place on June 11 and 12. While he has vowed to continue in his fight to find common ground, Mr. Bhalerao admitted he would, begrudgingly, walk away from his dream home if an acceptable offer were to come in.

“I think it's because of the grace of my guru that I am not particularly upset by this situation, but it is disappointing,” Mr. Bhalerao said. “I want nothing more than to reach a solution that will allow me to stay here. I have a dream for this place, a dream to give back to the community.”

That dream involves developing an initiative that would allow local residents to use the 1,200 sq. ft. shop on the Bhalerao property for yoga and meditation, completely free of charge.

“One of the biggest things I believe in is giving back to your community and giving back to this earth. That's one of the things that drew me to Mohanji – his belief that anyone and everyone can share things, whether it be time, space or objects and items, with one another. This is a big, beautiful property. Going through the correct steps, I would like to open it up for other uses,” Mr. Bhalerao stated.

But, for that to happen, he must first come to an agreement with the Township over his current predicament. Mr. Bhalerao says he plans to meet with CAO Susan Stone, while he has also drafted an email to Mayor Bob Currie, whom he also hopes to meet.

When asked, if not a religious event, what Mr. Bhalerao would classify last year's event, which appears to be the catalyst for the Township's ire, as, he likened it to a regular backyard BBQ that, he hypothesizes, thousands of Dufferin County residents regularly engage in each and every year.

“Since last year, there has been nothing. No events. Nothing at all. Maybe on a couple of Sundays I have had family here, and maybe a friend or two, but that's it. Then at Christmas, we did a regular celebration for Diwali, but that's no different to what people do at that time of the year,” Mr. Bhalerao stated. “I don't have a set schedule for anything inside my altar room, there is no official religious ceremonies and events happening. Normally, a place of worship there will be a dedicated priest working every day. Here, there is nothing. It's just me and my family when I am not working.

He concluded, “This is my property, my home. Just as with any home, nobody can come here without my knowledge or approval. I want to fix this problem and am willing to work with the municipality. Rather than simply telling me to shut this space down, we should be having discussions and trying to come to a resolution.”

Multiple attempts to reach Amaranth CAO Susan Stone for comment on this situation were, ultimately, unsuccessful.