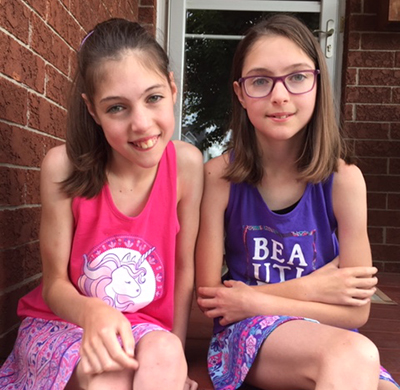 “The girls are 11, turning 12 in January,” Tammy Coogan commented of her twin girls, Lacey and Ashlyn.

Ashlyn, since birth, suffers from quadriplegia spastic cerebral palsy. In particular, cerebral palsy (CP) is caused by brain damage seriously affecting motor skills. This means, in Ashlyn's case, the doctors were convinced Ashlyn would be very limited. She would not be able to walk or even crawl, due to the severity of her condition.

The determination, dedication and wisdom of her parents, Tom and Tammy Coogan, pushed against the prognosis. Through their research and pro-active approach to their daughter's many problems, she can use a walker to a limited extent and she has some language skills. It has not been an easy time for anyone of this family.

A few years ago, Ashlyn developed epilepsy, sometimes with many seizures in one day. “She had a new seizure recently,” her mother told the Citizen, “drop seizure: her whole body gives out and she drops like a stone, It started while we were still at Holland Bloorview Children's Rehab Hospital.”

As the Citizen reported last year, Tammy  was obliged to stay there with Ashlyn for five months, following extensive surgery.

In layman's' terms, even somewhat as far as the surgery goes, “her right femur was cut in order to half rotate her knee, sharing bone from her hip as a bone graft to her leg. All this was followed by a hip replacement, as such.”

“The drop seizures started while she was in rehab.” said Ms. Coogan. “They tried to wean her off some of her seizure meds and it got worse.”

“Ashlyn is going into grade six, but she's doing grades two and three level. She is really struggling with math since she's had her surgery. She still needs the help and each week, there is speech and language therapy. She is working harder for everything.

“With other proceeds the Knights gave us last year, we bought her a new wheelchair and a new walker because she's growing out of things. She's strong but still under-weight.

“On June 5, last year, she had the surgery. Now there's no more botox. [Husband] Tom is still unemployed. I'm back working at Zehrs, now, officially, for 25 years. But he was with the girls for the summer, and it would have cost more for a caregiver.”

She told us, “During the summer, we actually went to Wonderland and met up with two of Ashlyn's roommates from rehab. They had a great time. Now that she's back to school, she's doing therapy. She has a new teacher, new experiences. The girls go to St. Andrew's, with the kids she knows going to that school. Ashlyn's not strange to those kids because they know her.

“When we go out, people still stare. The younger kids come up and ask questions and the adults just stare,” she remarked. “She is walking with a walker but not as proficiently as she was. She has to be on even ground, but, even so, less now because of the seizures.”

She was pleased, in any event, to tell us, “The school lent her a special bike, a ‘freedom concept'; it's like a big tricycle, with a harness and feet straps. It's been very good for her, for the exercise. She likes it because she feels she's like the rest of the kids, riding around the block. She can be a normal kid. What any child wants to be, isn't it – part of the group.”

Amongst Ashlyn's aids is her iPad, “for talking – called ‘speak for yourself.' She can speak but not everybody understands her. So, that helps her be understood.”

As a quadriplegic, Ashlyn's motor skills are very limited. For example, she can't hold a pencil, so “she can't write, so, she has to write on the computer – her EA's scribe for her because they understand her. They've known her since kindergarten. Ashlyn has very limited reading; she has short-term memory problems with vocabulary. We use a lot of music.”

Through it all, is twin sister, Lacey, also going into grade six, guide and companion, and who suffers from severe anxiety attacks. Tom and Tammy Coogan were clear from the outset of the girls' lives at school that they be placed in separate classrooms. They are almost constantly together at home and the separation at school is good, maybe essential, for both of them.

Lacey, at the tender age of 11, has many different ideas of what she might like to do with her life but, currently, she is into interior design and she loves the home shows on television. She has programs on her computer by which she designs houses and the rooms in them.

“Ashlyn goes some days to a respite camp, four or five hours a day, with DCAFS (Dufferin Child and Family Services)” said Tammy Coogan. “That gives Lacey time with us to do whatever she wants. Sometimes, she has friends over.”

Life in the Coogan household is, “sometime very hectic, running for appointments. Sometimes, it can be very lonely – sometimes, you have just remove yourself from social gathering, so the girls can have their down time.

“For school, I've always been careful to have a strict routine about the schedules we do for school. It's basically, get up, go to school, bedtime at strict times. There's not much resistance after all these years living with it. Ashlyn needs lots of sleep, nine hours a night. If she gets sick, she's out of school for a while. Sometimes, you have to be in a bubble, so as to not to have anything to catch. Unfortunately, if a flu is going around, we have to call in Lacey too.”

After all is said and done, “They're typical siblings – one minute fine, next at each others' throats, Lacey is helpful but I don't want to push her because she's still a child. Lacey's at the stage where she needs braces [for her teeth] too.

“Tom and I find that we're best friends. We're the ones that get it because we live it every day.”

Very importantly, Tammy and Tom Coogan want everyone to know “that we appreciate everything that the Knights have done for us and we appreciate all the hours that go into this ride. We understand that Ashlyn has a special spot in their hearts.”

Ken Moore is Grand Knight and he gave us a call to talk about the Charity Poker Ride this Sunday, September 8.

“We've got the Grand River Band coming to play from about noon to 3:00 p.m. They'll be playing outside. They do gigs everywhere but this is their donation. There's a silent auction inside the Orangeville Curling Club. This'll be the band's third time.”

“The band is setting up about 11:00. We set them up on a big trailer lent to us by Reinhardt Trailers in Shelburne. Scotia and TD are major sponsors. Sobeys contributes a BBQ on wheels and some food. We buy our stuff.

“Forty percent of all the proceeds go to Ashlyn,” he explained. “The functions that we run all year, we raise about $40,000 a year that we can spread around the community. We try to help as much as we can. It doesn't have to be Catholic based and we also work with other like- minded groups. There's a lot of people in great need out there.”

So, the Knights' 2019 Motorcycle Charity Poker Ride and Silent Auction will take place on Sunday, September 8, from Orangeville Curling Club, 76 Fifth Avenue, Orangeville, L9W 1G0. Registration is from 8:30 to 10:00 am.