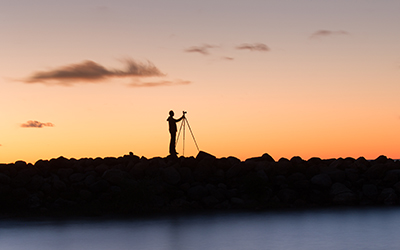 Peter Dusek says of himself that since his teens, “I've always loved and been interested in Easter philosophy – that as little as possible and as much as necessary – is my guide. It's about living life in a simplified way, less complicated.

“In the West, we seem to want our complicated lives – it's easier to work with nature than against it. People don't realize what treasures they have. I've never heard of people ‘in charge' talking abut working with nature.

“Chinese tradition is about working with nature – although not now.”

Certainly, it is nature that inspires his fine art photography and getting away from the noise and complications of the city into the calm and purity of nature is wonderful for him. Althoug he often drives his car as far into the country as he can, he likes the freedom of his motorcycle.

“I worried about the way so many people ride motorcycles, I thought I couldn't own one until a very conservative [read sensible] friend of mine bought one and then, I realized it's possible to ride responsibly.”

We talked about art in general. “One of the ingredients that helped me so much with the art is the feel of nature and the countryside. I take the photo, feeling the spirit of the thing. The most important part of art is the feeling. You can make a picture that tells what it is but it doesn't tell what it feels like.”

So, he strips his photos of some of their details. “I like to hint at what a thing is. It's all about capturing the feeling of the place and time. I think a lot of art is like that. I think even statues don't entirely look like the person.

“Music also – the feeling it creates in people, can have a message. I've often wondered if it's possible with visual art, if it can have an impact that's as great as music...”

Relatively new to making art as such, Mr. Dusek comes from a career in math and computer programming, at which he spent 25 years of his working life, leading him to a life of applying “creativity, craft and intense attention to details” to his photographic art.

In this newer life, as he says, “I have no education in the arts and artists. So, I'm working backwards. I'm studying those that I feel can have an impact.

“I have to learn now by following the artists I admire and learning from them.

“The past few years, I've been learning about Mark Rothko, one of the most sought-after painters in the States. I heard that his paintings are so powerful that people are moved to tears of joy by them. He committed suicide.

“I've been interested in Korean art, Dansuekhwa – so simplistic. I'm absorbing information, as it influences me. I think I'm a mixture. I take ideas from abstract and make them part of my photography.

And he showed us one: a simple, sapling tree, its leaves fallen, its trunk branched out into two. On it, three dark birds stand on solo points on the two branches.

“It took a long time and they could have just taken off together in a second. But I wanted them to each stand on a single branch and, finally, they did. I like to see people wonder if it's s photograph or a painting.”

He told us, “I have given an artist's talk about negative space in art and how it applies to our real lives. People have lost all their negative space in their lives. Now, it gets to the point when they have a pause, out come the phones so the only thing you have to react to is what's in front of you, rather than your own thoughts.”

In his opinion, “Nobody invents anything. The building blocks are there; a person just has to sort through and sort them out until a solution or a method works. A lot of artists study the world, people and art and synthesize it into their own little thing.”

We sipped at our tea, where we sat outside in a country place, surrounded by trees. A box of simple biscuits stood by, ready to serve as we pleased.

We began again at another point in his life as an artist: now.

“I've had quite a few new ideas, continuing on what I have been doing and lots of project ideas. I had a project – this is the power of the internet through Google, this is how it started. They found me online and came and bought some pictures that I had and we chatted. They are owners of a privately owned Canadian company. They bought pictures and gave me a commission.”

Basically, he took a photo of something in a cluttered place and he had to photoshop away the clutter, yet leave the whole as a simple photograph.

Removing all the clutter in that picture led him to comment, “It would be nice if people talked more about quality rather than quantity. There's so much more we should be doing for the environment. A lot of those are very easy solutions because it's about needing less. That's a message in my work that I'm trying maker clear.”

The challenge of marketing is an ongoing issue, although his beginning came form looking for answers. His initial exhibition with the Abbozzo Gallery in Toronto, when he asked questions about how to go forward and they offered him a chance with them. He sold his collection twice to Saks Fifth Avenue and understood immediately the sense in keeping his work as limited editions, for collectors: corporations, institutions and private collectors.

In the United States, Mr. Dusek was travelling to Louisville, Kentucky to see the work of a photographer he admired, at the Paul Paletti Gallery.

“While I was there, I talked to the gallery owner. I showed him my worked and asked about showing in the U.S. Then, after a show in Toronto, I was on vacation down there and I showed the pamphlet from the Toronto show and he offered to stage an exhibition of my work there. He's such an amazing guy – he does so much for photographers in Louisville. He's a collector now, too, and I have an agent there, Naomi Stuecker. She is associated with the gallery there.”

Part of what makes Mr. Dusek's pictures so interesting, in addition to their content, is their size, for he takes his photos and has them made very big so that they can dominate a large space.

The big news, the big potential now is glass.

“A large commercial glass company in the States has an art department, that is able to print photographs on glass and that can do eight foot sheets that you can use in lobbies.. They can print a photograph, then the ink is converted to glass crystals and becomes permanent. It can't fade and the glass is tempered. There are so many applications and not much competition yet. There's a lot of potential.

“The reasoning behind the limited edition system is it encourages the artist to create new stuff and people see and buy your new art. There is a risk to the artist: once your work sells out, they can go to auctions and sell for lots of money and the artist doesn't benefit.

“Artists hold ‘artist's proof,' typically 10 percent of the edition size. Later, to buy an AP has more value than earlier editions. When new editions are released, it's good to buy earlier because, as they sell out, they increase in price.”

He told the Citizen, “One thing I've discovered, making the art is hard, marketing is hard, too. Finding galleries, finding agents; there's so much to be done, so many possibilities. It's hard to know what to focus on next.

“You have to find your own way. Artists differ, depending on what's happened in their paths. There're so many ways to go – it's hard to know. You try something and then, stay with what works and leave behind what doesn't.”

He thought about ambition. “It's like an endless puzzle to be solved. The farther I go, the farther I see there is to go. “

One thing Peter Dusek knows for sure, “If you sit at home, nothing happens.”