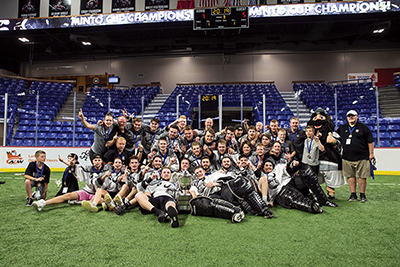 The Orangeville Junior A Northmen completed one of the most successful seasons in the club's history last Friday with a final 7-5 victory over Victoria Shamrocks in Langley, B.C. to win the Minto Cup, emblematic of the national  Junior A Lacrosse championship.

The club earned the right to go to the national competition by winning the Ontario Junior A Lacrosse League title in a final series with the Burlington Chiefs on August 7, in front of a home town crowd.

This is the seventh time in the Northmen Junior A organization's history that they have won the coveted Minto Cup.

The Northmen finished the regular season in first place with a 16 – 3 – 1 record before slamming their way through the playoffs, winning 11 of 14 games in the quest for the Ontario Cup.

Entering competition in Langley, the Northmen completed a perfect showing through the round-robin competition and the final series.

After an opening game that saw them win 12–1 over Victoria, they delivered a 12–7 win over the Coquitlam Adanacs, and an 11–4 win over the Okotoks Raiders, before heading into the final best-of-five series with the Shamrocks.

In the final game, Dawson Tait scored the opening goal in the first period.

Jonathan Donville and Kyle Waters both scored in the first to make it a 3 – 2 Northmen game going into the second period.

Waters got his second of the game just 29 seconds into the period.

With two Shamrocks goals recorded in the second frame the game was tied at four with one period remaining.

The teams swapped goals in the opening minutes of the frame, leacing the game tied at 5-5 with 14 minutes left to play.

Jonathan Donville broke the tie with 5:06 remaining and followed up with a second goal with just over three minutes left to give the Northmen the win.

Donville finished the game with three goals and four points. He led the Minto Cup in all three statistical categories with 19 goals, 20 assists, and 39 points over the six games.

For head coach Bruce Codd, this is a real milestone in his career. It is only the second year he's been on the Junior A bench.

“Victoria got a bit better as the tournament went on,” Codd said, after the Northmen hammed the Shamrocks in their first meeting at the tournament. “During the round-robin I thought we did a very good job of just taking care of business. I think we didn't lead, for maybe just ten minutes in the round-robin. We were always out front. I thought it was a good tournament and we couldn't have asked for more from out guys.”

Going into the final championship series Codd said the team was confident but not too confident.

“We were confident but at the same time we knew they had a good goaltender and a couple of guys who were a dangerous threat. They were a team that was very resilient – they had to win their last round robin game to get in the final, which they did. They had to score a bunch of goals and they did that. They were a team with a lot of character. We felt good about it, but obviously you still have to play well.”

The fact that the Northmen went undefeated in the tournament made a statement about Orangeville lacrosse.

“People understand that when you play the Northmen you're going to be playing a quality team,” Codd said. “I think we maybe did catch people by surprise by how good we actually were.”

Jonathan Donville was named the Minto Cup Most Valuable Player.

“I was happy I could contribute at the end and make a few plays but even if I didn't score a point this tournament, it would have been just as sweet,” Donville said after the win. “They say it is the hardest trophy to win in our sport and I kind of see why. It took everything we had as a team. There are no words to describe it.”

The Minto Cup and hockey's Stanley Cup have similar origins, the Minto Cup having been donated in 1901 by, and named after, Lord Minto, Canada's governor-general of the day and the Stanley Cup by Lord Stanley, who preceded him in the same office in 1892.