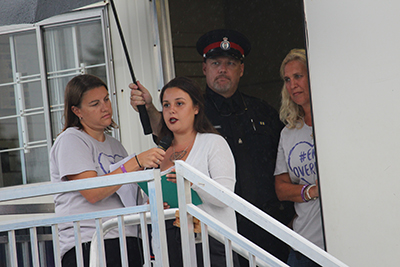 With at least 178 overdoses recorded so far this year in Dufferin County, several local activists are keen to shine a light on an issue they say is worsening in our community.

Kristy Fearon, addiction outreach counsellor with Family Transition Place, and Cst. Scott Davis, community services officer with Orangeville Police Service, have spent the best part of the last two years working alongside various other community volunteers to establish a committee devoted to fighting the growing overdose epidemic in the region.

Launched in 2017, the Dufferin Overdose Awareness Committee is attempting to bring attention to the wide array of addiction services available in Dufferin County and Caledon. The group held its third-annual health fair at the Edelbrock Centre in Orangeville on Tuesday evening (Aug. 27), with 18 community vendors on hand to offer information and support to individuals and families in need.

“The big thing about today is just raising awareness. We need to make people aware of what the statistics are across Dufferin County, because this isn't something that appears to be going away right now,” Cst. Davis told the Citizen.

Of those 178 reported overdoses in Dufferin County so far this year, at least two have resulted in death. Last March, 19-year-old Mason Corrie and 20-year-old Bryan White passed away within four days of one another after, police evidence suggests, ingesting counterfeit Xanax pills laced with fentanyl.

OPS put out a safety alert shortly after news of the deaths were made public, cautioning residents about an apparent trend where drug dealers are repurposing Xanax, a prescribed medication used to treat various anxiety disorders, by crushing it and adding quantities of other, more potent and dangerous drugs. Earlier this month, Wellington-Dufferin-Guelph Public Health issued a health advisory of its own, after seeing 12 reported opioid overdoses occur within a 24-hour period.

While official statistics for our health region are not currently available, a report posted on the Government of Canada website states that in the first quarter of 2019, there were 833 suspected opioid-related overdose EMS responses in Ontario, and more than 3,500 across the country.

Dufferin County Warden Darren White was on hand to share his own personal story with opioids and the devastating effect they can have.

“I'm here today because of a two-year-old boy named Ronan. Ronan is my grandson and he is growing up without a father because of an opioid-related drug overdose,” Mr. White said. “His dad, who I hoped would be my son-in-law one day, unbeknownst to him, took a drug laced with fentanyl and passed away.”

The warden went on to state his belief that there needs to be a change in the way the general public approaches and handles a drug overdose.

“I think a lot of this has to come around to education, and I don't mean educating people who take drugs. I think we need to take some time and use some of our resources to educate the general public,” Mr. White noted. “A couple of weeks ago, I posted a health alert from WDGPH about an unusually high spike in overdoses in our region. Some of the comments I got from people across our County, quite frankly struck me and I found them to be very negative.”

He added, “People do not realize what we're talking about when we talk about drug overdose awareness. A lot of people out there feel this is the victim's own fault.”

Warden White would go on to recite a conversation he had with one individual who felt drug overdoses were the sole fault of the person taking the drug. He asked this person point blank if a family member of theirs had passed away due to an opioid overdose after, as Mr. White hypothesized, becoming addicted to a drug that was prescribed while the individual was suffering from cancer, if he would still feel the same way.

“This person replied yes, he absolutely would,” Warden White said. “I think that shows the level of ignorance in the general public when it comes to this kind of an issue.”

Christine Madden has spent the past few years developing a drug strategy for the County of Dufferin. She too has a personal connection to overdoses, with her younger sister, Shelley,  passing away from an apparent overdose back in 2004 at the age of 22.

Recounting her story, Christine explained how her sister became intertwined in a lifestyle of drinking at a young age. By the time she was 20, she had become addicted to drugs and was dependent, largely, on cocaine. There was, it seemed, light at the end of the tunnel, as Shelley opened up to her family, shared her struggles and sought out help.

Shelley completed two residential treatment programs en route to becoming clean. From there, she started to rebuild her life, enrolling in university and “on the right path to a successful life”, as Christine explained. Then, just when things seemed to be working out, disaster struck.

“By 2002, my sister was clean, she began university, had all the supports in place at home. Things were going well. In late 2003, we noticed her behaviour started to change. My beautiful, blonde sister cut her hair, started getting piercings and showing off different physical appearances. We knew something was wrong again,” Christine remembered. “Then, on Feb. 21, 2004, after starting oxycontin for one month, my sister died. She died alone in her bed.”

Referencing the problem in Dufferin County and Caledon, Ms. Madden noted there are dozens, if not hundreds of people in our community who need the community's help, before it's too late.

“This is now an epidemic. We have reached epidemic proportions. People continue to die. We need to help people by starting to treat them with compassion. We need to provide the services they need and we need to provide them when they need them,” Ms. Madden stated. “There is a very small window when someone struggling needs help. They need help then. Not in six weeks, or six months, they need help when they're ready to have help.”

She concluded, “We need to stop judging. We don't know people's stories. Nobody signs up to become a drug addict to die alone. Even though people may think they ultimately made this decision, they did not. They didn't ask for this disease. They're struggling and we need to help them.”

While statistics posted on the Government of Canada website support the general belief that overdoses, generally speaking, occur amongst the younger generation, and males specifically, Dufferin County EMS Chief Tom Reid made the point that the epidemic, at least locally, does not discriminate.

“This is an issue that isn't isolated to any particular group,” Mr. Reid stated. “When you talk about people having pre-judgements about who suffers with addiction, it's everyone. I can tell you that as a matter of fact. I can absolutely assure you that this is not an isolated issue. I can't get into specifics because of confidentiality, but this is something that is happening (to different people and different age groups). This isn't one group, this is happening to our community.”

He spent time discussing how people can look out for and spot an overdose, while explaining one potential method for success should you find yourself in a situation where you have to treat someone suffering from an overdose.

“When you see that a person is unconscious, or know that someone may have had too much of something, make sure you call 911. Get them the help they need,” Mr. Reid stated. “If the individual is unconscious, we want to make sure people are starting artificial respiration. Lay the individual on their back, tilting their head back and breath for them (mouth-to-mouth) every five seconds. If there's no pulse, start CPR.”

He added, “Naloxone is great, but if they're not breathing, it doesn't do much for them. For every minute a person isn't breathing, their possibility of being resuscitated decreases by ten percent. So, it's really important to start breathing, apply naloxone and call 911. By having those three things together, that increases the chances of survival. That's what we need to coach people to do. That will help us to save more lives.”

Reflecting on the event, Ms. Fearon noted overdoses are preventable and the purpose of the Overdose Awareness Day event is to share real facts about drugs and what to do when you see someone experiencing an overdose. She also sees the event as an opportunity to potentially change the stigma on overdoses in the community.

“Each year we lose thousands of people from drug overdose globally. Some survive, but suffer a permanent injury, which leads to devastating impacts on family and friends. Dufferin County is not immune,” Ms. Fearon stated in a release to media. “You may have seen it, it has likely happened to people around you. Tomorrow, it could be someone you love. This is not an invisible issue.”

Cst. Davis noted the local team is working towards implementing a Dufferin Drug Awareness Strategy, which he says should roll out sometime in 2020.

“We need to expand more on the issues we're having in our community. We need to get more players to the table and continue to spread the word,” Cst. Davis said. “Then we need to work on the funding. There are grants available for this type of strategy.”

He concluded, “The bottom line here is the public needs to know this is a real situation here in Dufferin County. This is something we need to continue to work on, because we can't continue (to allow things to go on as they are). We have a wealth of resources here, we just have to get the message out and educate people to use them.”