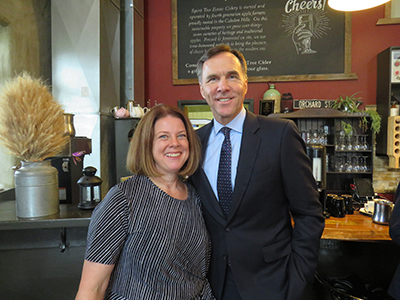 On Tuesday, August 27, Mr. Morneau spent time touring in Caledon in support of local Liberal candidate Michele Fisher. After meeting Caledon Mayor Allan Thompson and being shown around Spirit Tree Estate Cidery, celebrating its tenth anniversary next month, both Liberals sat down with The Citizen to discuss a couple of the larger issues around affordability, sustainability, and the Liberal platform for Dufferin-Caledon in the upcoming October election.

“I'm really happy to be out here with Michele,” Mr. Morneau said. “I guess we're going to learn a little bit more about the issues and challenges here and talk to a lot of people. I think in this area, people are going to look towards an opportunity for change, to make sure that Dufferin-Caledon is well represented federally. It just seems to me there's just not a lot of advantage to not having someone who's part of the government in office.”

He said one of the largest issues facing Canada and the GTA, and increasingly in ridings like Dufferin-Caledon, is affordable housing. The Liberals are running on a principle of sustainable infrastructure, which highlights affordable housing as one of their top priorities.

“I think we've managed that relatively well through the use of approaches about mortgages, that ensure people are getting into homes that make sense for them from the standpoint of their opportunities and financial situations. That's moderated that risk to a great extent, and I think provided more stability for the marketplace.”

He added, “The second issue I think is really important is affordable housing for people that are in an entry-level position in the market. There's a number of ways that we've had a big impact on that. We've put an awful lot of money directly into an affordable housing strategy that's enabling cities to refurbish and create more affordable housing directly, but we've also put in place rental financing. So, for renting units, there is better financing available for people who are trying to create rental housing available. That'll have an impact across the country, obviously where there's a greater number of people who are considering renting.”

Mr. Morneau elaborated on that rental financing initiative, saying it would benefit “middle-class families” who earn up to $120,000. With prices seemingly forever on the rise here in Dufferin-Caledon, the federal finance minister noted the development of new residential subdivisions, and things such as senior living facilities would be key for first-time buyers to break into the market.

“As far as this area, creating new sources of supply will be important. Increasingly there will be an increasing number of people looking towards retirement. Places like Caledon and Orangeville are very desirable as places close enough to the downtown (Toronto) core, yet far enough that they can have a lifestyle that's more attractive. So I see huge opportunity,” Mr. Morneau stated.

“I think there's a real need in this area,” added Ms. Fisher, “in Caledon especially, for increased housing for seniors, you see pockets of those developments, but there is a real demand for more of them. We need to find a way to make them happen.”

“What we did as a Liberal government,” continued Mr. Morneau, “is put in place a national housing strategy, which is really important to think about when considering those sort of changes, and making sure that there's not only the financial capacity being delivered by the federal government, but the financing capacity for people to create new housing. I think that's been a big issue that we've focused on the last twenty years.”

He added, “I think we need to continue to focus on that approach, so the Conservative approach to cutting funding, to cutting services, to not providing much opportunity in any area, which we're seeing demonstrated in the Doug Ford government, is clearly not something that's going to allow us to make investments in the places where it's going to matter.”

“For me,” continued Ms. Fisher, “one of the reasons I'm proud to be running [as a Liberal] is we are investing in Canadians. When you take a look at the measures to help young people get their own first home, for getting a foothold in the housing market, is so important. It's important because people can continue to live here. … We want to make it so they can have their dream, and they can continue to live in the community where they choose to live.”

Also among the most important issues to the Liberal party was maintaining people's capacities to live in rural communities and smaller areas like Dufferin-Caledon, with equal access to amenities like high-speed internet.

“What we've done,” said Mr. Morneau, “is take a look at making sure that everyone in the country has access to high-speed internet. The approach that we laid out in our 2019 budget, which we're implementing now, is one that's got a target, which is 100 percent of Canadians, by 2030, having access to high speeds.”

He added, “That, of course, is something we think we can get at much more rapidly for most people. We think we're very rapidly going to get into a much better position because of the funding we're putting into it.”

Mr. Morneau noted the Liberal government has put an increased focus on investing in different forms of infrastructure across the country since 2015. When asked what, specifically, the feds had done to ensure residents in rural areas had greater access to high-speed internet, Mr. Morneau noted officials in Ottawa have been in constant communication with key internet service providers and been up-front with its commitment to invest.

“What we did when we came into office in 2015 is we significantly increased the amount of funding on infrastructure overall, recognizing that this is an area that could not only help our economy and get people working, but also help us to make sure that we had greater levels of productivity.

“The internet's a really good example. So there's really a broader strategy: number one, we've given the large communications providers the ability to accelerate their investment,” Mr. Morneau stated. “Then, what we've done is we've given funding to make sure we have the capacity to get past where they would go in places that are a little more difficult to get to. And that funding is both directly from the government and also from the CRTC [Canadian Radio-Television and Telecommunications Commission]. And that's helping to ensure that the fiber will be laid in places that are more difficult to get to.”

He continued, “We're also looking at new technologies to make sure we can get to the most remote and northern parts of our country. So we need to stick with this plan to make sure we execute on it. I'm excited by the opportunities, but I think it's just essential for rural communities. If we don't do it, we won't have people able to live in the places they want to stay.”

Ms. Fisher then brought up the SWIFT (Southwestern Integrated Fiber Technology) project, in which the Liberals have heavily invested, and for which Caledon Mayor Allan Thompson is on the board.

“That's going to be one of the projects that brings ultra-high-speed internet to Dufferin and Caledon. It's a partnership between the federal government, the province, the municipalities who are part of SWIFT, and the telecoms,” Ms. Fisher said. “What I've heard is we are looking at a hard deadline of 2023 to have ultra-high-speed internet to all of the SWIFT partners, which would include Dufferin and Caledon. It's essential if we're going to be building the kinds of opportunities for businesses and jobs that we want to see in Dufferin-Caledon.”

Switching gears, Mr. Morneau discussed what he believed the key themes of the upcoming election were going to be.

“It's really going to be two very different visions for the country. Over the last four years, we've really invested significantly to ensure that middle-class Canadians feel like they have more optimism about the future for themselves and their families,” Mr. Morneau stated.

He added, “We think that the context for this election will be, ‘Do we want to move forward?' with a continuation of a plan that's clearly working, recognizing that we need to constantly be thinking about how we can be sure people can face up to challenges around affordability. Or do we want to go back to what we see as ‘the Harper Approach' to cuts in services in places like Dufferin-Caledon where demographics are on the side of people living here.”

On the major opposition, the Conservative Party, which has had a hold on Dufferin-Caledon since 2000, Ms. Fisher commented, “I feel very positive about our campaign in this riding. I've spoken with so many people who tell me that they feel it's time for a change.”

“It seems to me,” said Mr. Morneau, “that having someone who has a fresh approach for this area, who has an understanding of the business community and the opportunities, is really important.”

Clearly referring to Conservative candidate  Kyle Seeback, he added, “Having someone who lost in a previous election in a different riding come in, and purport to represent this area, seems to me that's really not what's needed. Seems to me you need someone with an understanding of the area, who has the context and the approach that's together with what their government's trying to achieve, which is moving forward with families here.”

The federal election will take place on Oct. 21.