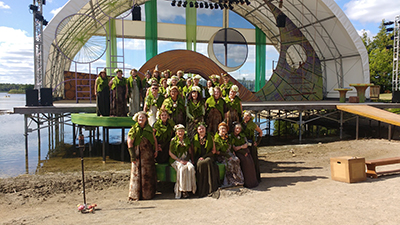 During the technical rehearsal for A Midsummer Night's Dream on August 20th, actress Sara Birken, who was to play one of the leading roles as “Hermia,” sustained an injury which made it impossible for her to perform in the production. Despite this heartbreaking loss, the ‘Dream Team' embraced “the show must go on” tradition, and opened Theatre Orangeville's largest production ever, on schedule last Thursday, August 22nd, to an incredible response.

Associate director Daniel Reale stepped into Sara Birken's role to deliver a sensitive portrayal of “Hermia” with a day and half of rehearsal ... completely off script. Colin Simmons, the director of A Midsummer Night's Dream, explained the change in casting to each audience throughout the weekend-long run, and dedicated all performances to Sara. It was a testament to Colin Simmons' excellent direction and Artistic Director David Nairn's leadership, that the cast and crew were able to refocus and produce a stunning show that ran smooth as silk with Paula Stewart stage managing.

David Nairn said that having Dan Reale step into the role just made sense. “The entire company was rocked by the event and my heart broke for Sara – it was just a terrible thing,” he said. “Once we came out of panic mode, it was Dan who brought the idea forward, that he step in, and we knew it was the perfect solution. It calmed the company and soothed anxieties.”

Mr. Nairn said Sara Birken, who was able to watch the show Saturday night, “was happy that the role had stayed within their theatrical family. Literally, scores of people told me how amazed they were by Dan's ability to take on the role so quickly.”

As “Lysander,” traditionally performed by a male, had already been cast as female with Dakota Duguid in the role, the funny and engaging actors who played the “Lovers,” which also included Darcey Baker as “Helena” and Adriano Reis as “Demetrius,” were all dressed androgynously. The gender-bending casting played in beautiful harmony with the ability-inclusive casting and added yet another layer to the show. As Shakespeare wrote in A Midsummer Night's Dream, “Love sees not with the eyes, but with the mind, and therefore is winged Cupid painted blind.” Moreover, in the comical romancing of A Midsummer Night's Dream, love is a navigational nightmare, regardless of which gender-pronoun the players go by.

Sharyn Ayliffe, Program Coordinator for Theatre Orangeville, reports that over 1500 people came out to see the outdoor production during its five-show run. Brian Ball's set design was a breathtaking vision as patrons entered the performance area. Enormous, as well as spectacular, the set boasted giant forest and playground pieces perched on and around the scenic Island Lake stage. The set was complemented by dazzling costumes designed by Wendi Speck and dramatic lighting designed by Jennifer Lennon.

Jenee Gowing's choreography danced The Dream to a beautiful finish, and the Orangeville Show Chorus, led by Joan Borden, added an ethereal touch with sweet a-capella voices that seemed to drift in like a gentle breeze from the woods.

The entire cast studied and rehearsed for four weeks to embrace and present the rich and complex language of Shakespeare with clarity and understanding – a challenge for even the most experienced actors.

David Nairn credits Director Simmons for being relentless in his pursuit to have the audience understand everything the actors said. That pursuit extended to everyone in the company, including the talented Creative Partners On Stage and Young Company members, who took on, not only the challenge of Shakespeare, but the task of playing alongside fully professional actors – not for the faint of heart. Special mention of Young Company performer, John Daniel who led the mischief ever onward as a ‘charming' “Puck.”

The community cast members started as young as 12 years old, and blended beautifully with the seasoned equity professionals, including David Nairn, strikingly noble as Duke Theseus; Debbie Collins, strong and proud as Hippolyta; Roberto Ercoli  stubborn but relenting as Oberon, King of the Fairies; Robyn Harrison, spirited and sparkling as Titania, Queen of the Fairies; and Luc Trottier, irrepressibly hilarious as Nick Bottom.

“What occurred on stage,” said Mr. Nairn, “was so beyond the limit of my imagination and dream. It blew me away. Once the creative people became involved, they made it their own.

“It was so personally satisfying for me, to look at Colin and Dan, knowing that they started at Theatre Orangeville when they were 10 and nine years old – and they brought their young energy and talent back home to direct the biggest project Theatre Orangeville has ever done.”

He added, “This is a huge tribute to them, to the company, and to the community. If the creative resources, teachers and leaders were not in the community we couldn't have done it. It is only possible because the support systems are there to create the art.”

Watching A Midsummer Night's Dream, it was very apparent that all involved were embraced equally for their creative contributions. The result was five spectacular, funny, passionate, joyous performances and five standing ovations.

The inclusiveness of the production touched the hearts of the audience, and when each show ended, there was a feeling that the inequities of the world beyond the forest had fallen away for a moment, and that on that midsummer's night, all was as it should be.