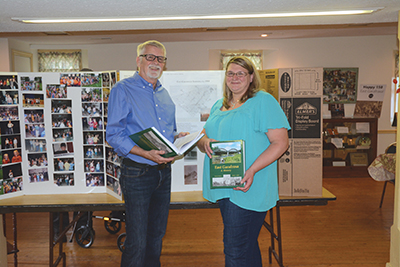 It was a time when stage coaches were the transportation of the day with small villages springing up at six mile intervals along the route to allow for a change of horses.

Of course when a stage coach stopped, the passengers might need a drink or place to stay, so a smart entrepreneur would build a hotel to accommodate travellers.

It was 1869, and it was the year East Garafraxa was incorporated as a separate township.

The current residents of East Garafraxa celebrated their sesquicentennial – that's 150 years – with an event at Orton Community Park to mark the occasion.

Friends, family, and neighbours gathered from the surrounding area to celebrate a century and a half of tradition and family roots that run deep in the Township of just over 2000 residents.

West and East Garafraxa were originally both in Wellington County.

The split ended up with East Garafraxa leading the movement to create Dufferin County.

“It became provisional county. They still had to get a court house and jail built, and a land registry office,” explained local historian Krista Taylor. “Those were the minimum requirements for a county to be established.”

They also had to have a referendum to get enough votes to create a new county.

Ms. Taylor is the co-author of a history book – Garafraxa A History – along with local historian Steve Brown. Mr. Brown recently retired as the first archivist at Dufferin's museum.

The two have researched the township's history and have many stories of the early days in the area.

As with many other municipalities at the time, a railway was an important link that helped them thrive.

“People started moving into the area in 1826,” Mr. Brown explained. “The major influx came in the 1840's and early 1850's, and in 1869 there was a whole bunch of proposals for the construction of railways. It was pretty much settled here with farming but it was basically subsistence farming because they had no kind of big market because the roads were terrible.”

With the coming railway that eventually ran between Cataract and Elora a rift developed between East and West Garafraxa because depending on the route it took, only one of them would benefit from it arriving.

“Population-wise, the West part of Garafraxa was settled by Scottish Liberals and the Eastern part was settled by Irish Catholics,” Mr. Brown said. “And each division backed it's own proposal.”

Back then the two groups had a natural distrust of each other. This eventually led to the split.

The celebration offered residents to experience some history of the area in which they live.

“Today is a bit of a walk down memory lane,” Ms. Taylor said. “Here in the church there is a beautiful assortment of wedding dresses from over the past 120 years. The County museum has also provided a display.”

Along with bus tours of the area, there was a chicken dinner, speeches, entertainment, and a fireworks show to cap the day.

The event gave residents, many of whom are descendants of the early settlers, a chance to celebrate the place they call home.