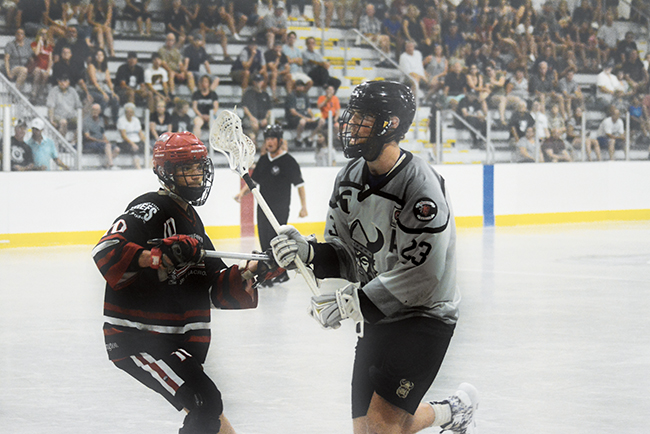 The Orangeville Junior A Northmen are one game away from claiming the Ontario Junior A Lacrosse championship after a 6 - 5 win in game four of the final series with the Burlington Chiefs on Monday, August 5.

Game five of the series was scheduled for Wednesday, August 7, at Tony Rose arena in Orangeville however results were not available at press time.

It has been a tough series between the two teams who finished the regular season in first and second place – both with 16 wins behind them.

The final series got underway on Tuesday, July 30, in Orangeville, with the Northmen taking the win in the opening game with a 9 – 5 final score.

Game two of the series was in Burlington.

After dropping behind in the first period the Northmen responded in the second with three goals that gave them a 5 – 4 lead at the end of the second.

The game went into double overtime to decide a winner with Burlington getting the winning goal at 1:09 into the second OT period.

The series returned to Orangeville for game three on Saturday, August 3.

The O-ville team took a 4 – 0 lead in the first period before the Chiefs got back in the game in the second period.

Back in Burlington for game four of the series, the O-ville team trailed 2 – 1 at the end of the first period.

After giving up another goal early in the third period, O-ville's Kyle Waters went on a rampage scoring two goals just 39 seconds apart then

Orangeville game with one period left to go.

The Chiefs fought back scoring two goals in the third to tie it up, but the Orangeville's Sam Firth got the tie break at 16:17 into the period to give the Northmen a 6 – 5 win and a two game lead in the series.

The Northmen could put it all behind them with a win in game five.