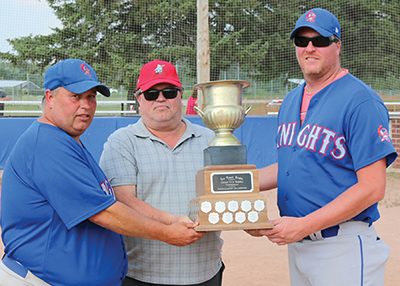 The New Lowell Knights came out as the winners in the August long weekend tournament they host every year.

Ten teams from around the province signed up for the three day event that got underway on Saturday morning at the New Lowell Recreation Park diamond.

The Orangeville Giants were entered in the tournament. In their first game they had to settle for a loss to the Mansifield Cubs even though the game ended in a 3 – 3 tie.

Tournament rules do not allow for overtime innings so a tie game is decided on the most runners who got on base during a game.

The New Lowell team won their first game 12 -3 over the Creemore Braves.

In their second game they knocked the Niagara Falls Expos out of competition with a 5 – 1 win.

The final matched up the Knights with the Welland Chiefs.

It was the second year in a row these two teams have met in the tournament championship game.

New Lowell opened the scoring with a run in the second inning, then plated two more in the futh and one in the fifth to take a four run lead.

The Knights brought in another run in the sixth then finished off with four in the seventh inning.

The Chiefs scored a single run in the seventh inning.

The final was a 9 – 3 win for the Knights who claimed the tournament trophy.

In the tournament consolation championship, the Creemore Braves met the Merritton Alliance.

Both teams scored a lone run in the first inning. Merritton took the lead with a single in the third.

Creemore answered with three runs in the fifth inning to take the win.