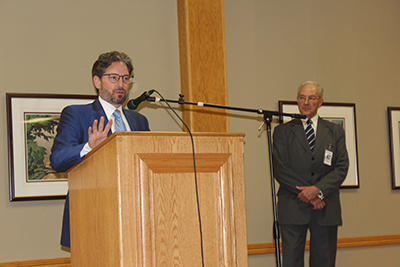 Mr. Seeback, a former one-term MP for Brampton West, cut a confident figure last Wednesday (July 31) as members of the Conservative Party in Dufferin-Caledon gathered at the Orangeville Agricultural Society Event Centre to select a new candidate to replace the retiring David Tilson.

A total of 1,343 ballots were cast at the meeting, which, just as was the case at the original nomination held back on March 19, made use of the much-maligned ranked ballot system. In that process, members are asked to select a first, second, third and fourth choice when placing their vote. All votes are counted, and the numbers revealed in the first round disclose how many first choice selections a candidate received. Each round, the candidate with the lowest number of votes is eliminated, with their votes then being reallocated to the remaining members, based upon where they placed on a voter's ballot.

In the first round of voting, Mr. Seeback received 485 votes. Ms. Shaughnessy received 392 votes, Mr. Gill 365 votes and Mr. Williams 70 votes. In total, 28 ballots were spoiled. With Mr. Williams and Mr. Gill eliminated in the first and second rounds respectively, the final round saw Mr. Seeback and Ms. Shaughnessy go head-to-head for the nomination.

Catching up with Ms. Shaughnessy's team on nomination night, there was a feeling they were going to fall short in the final vote. When results were revealed shortly after 11 p.m., those fears came to pass, with Mr. Seeback coming out on top with 566 votes to Ms. Shaughnessy's 448 votes.

The result finally brings an end to months of uncertainty within the local Conservative community. At the original nomination meeting, held in March, Harzadan Singh Khattra emerged as the shocking, yet overwhelming, victor, besting Ms. Shaughnessy, Mr. Williams and, at the time, the perceived frontrunner for the role, Kevin Weatherbee. Just days after that nomination, Ms. Shaughnessy filed an official appeal with the Party's head office. Following a month-long investigation and subsequent appeal process, it was determined, on April 25, that Mr. Khattra was to be disqualified as the candidate and barred from running in any future process.

Speaking to the Citizen this week, Mr. Seeback was keen to put all of that controversy, and all of that discontent behind him as he focuses on securing a sixth consecutive term for the Conservatives in Dufferin-Caledon.

“This was a really big moment for me. I felt really overcome with emotions on the night, mostly because I didn't know I was going to win having entered the race so late,” Mr. Seeback said. “But, I've taken a little time to let it all sink in and now we need to get to work on making sure we have the support ahead of the federal election to win this riding.”

Mr. Seeback took a lot of flak during what was a shortened six-week nomination race, with criticism pouring in from all directions. Claims that he was simply a parachute candidate with no ties to the community, that he was running only to serve controversial groups such as the Campaign Life Coalition and Parents as First Educators, or, more nefariously, that he received assistance from the Conservative Party's head office to not only ensure he was able to run in the nomination, but to also assure his eventual victory, are, in Kyle's own words, categorically untrue.

“There were a lot of unfair comments made over the past few weeks. So many people have criticized me as a parachute candidate, which isn't the case,” Mr. Seeback said.

When asked by the Citizen to explain his potential ties to some of the controversial groups that backed him in this nomination, Mr. Seeback indicated he has nothing to hide.

“I don't have any connections to Campaign Life. They've supported candidates in nominations across the country. They chose to support me. That's fine,” Mr. Seeback said. “I am not beholden to any group that supported me. The only people I'll be beholden to are members of the Conservative party, and my constituents. That is it, full stop.”

Regarding rumours that he received help from higher ups within the Conservative Party, Mr. Seeback simply labelled them untrue, stating he had to go through the nomination process just the same as the other three candidates.

“If the party wanted me as their candidate, they could have appointed me. They have the power to do that and it has been done before,” Mr. Seeback said, noting this was an open nomination process that he had to fight to win.

Now that he is firmly in place as the Conservative candidate in Dufferin-Caledon, Mr. Seeback said he'll be spending the next few weeks meeting with local residents and identifying the issues that are important to the community.

“While I will, obviously, be following the Party platform, I made it clear during the nomination process that I truly want to be a voice for our community. If elected, I will commit to holding townhall-type meetings every four months, where everyone is invited, everyone is welcome to attend. I am prepared to talk about any issue – that's the number one priority,” Mr. Seeback said. “Number two, I am going to set up a whole bunch of citizen advisory groups that I'll meet with to keep me informed on all the issues going on locally. Those committees will be absolutely non-partisan. I'm telling people that I want to hear the good, the bad and the ugly when I'm the representative.”

Delving into some specific issues, Mr. Seeback noted high-speed internet for rural residents requires urgent attention, with infrastructure investments a close second on his list. He also vowed to do his part to “deliver real tax relief, real affordability” for Dufferin-Caledon residents, asserting that the current Liberal government has failed in its promise to keep taxes down for the middle class.

Having worked hard to dispel fears of corruption and, worse, incompetency in recent months, Dufferin-Caledon Conservative Association President Jennifer Innis said she was happy with how last week's nomination meeting unfolded, noting there had been few complaints registered by the local membership.

“I think the nomination meeting ran very smoothly from what I saw and heard. There weren't really any long line ups, there was no confusion. From what I saw, everyone followed Party rules. I didn't hear any negative feedback, in fast I heard a lot of positive feedback from members who had concerns or issues last time around,” Ms. Innis stated.

She added, “I saw one comment on social media, asking about rumours that individuals were using Brampton drivers' licences as identification – I asked staff about it and they said the rules were followed. The one thing I will say is, this time around, head office, at the request of the association, conducted a thorough audit of the membership list. It was not a significant number, but there were some members removed. Head office conducted a thorough check of the membership list and I am very confident in what they supplied to us.”

With the election now just two months away, Mr. Seeback says he'll be working hard to convince local residents that a vote for the Conservatives is “the right choice to make”. Having served as MP for one term in Brampton, he said he has the necessary experience to hit the ground running in Ottawa.

“The learning curve for being an MP is incredibly steep. There are so many issues, both federally and locally, that you have to understand. I really have a great grasp of the federal issues. I have a good grasp of how to go about getting things done. That's a big thing,” Mr. Seeback said. “I've been there for four years, I delivered a lot for the people in Brampton West. I don't need to spend the first two or three years figuring it out, I'll be able to deliver results right away.”

He added, “I think the Conservative Party has the best leader, the best platform that is going to make the changes in people's lives that are necessary for them to succeed.”

Mr. Seeback will compete for the local vote alongside Liberal candidate Michele Fisher, Green candidate Stefan Wiesen and People's Party candidate Chad Ransom. To date, there is no declared NDP candidate in Dufferin-Caledon. The federal election will take place on Oct. 21.