‘The Dream’ comes true for Theatre Orangeville later this month 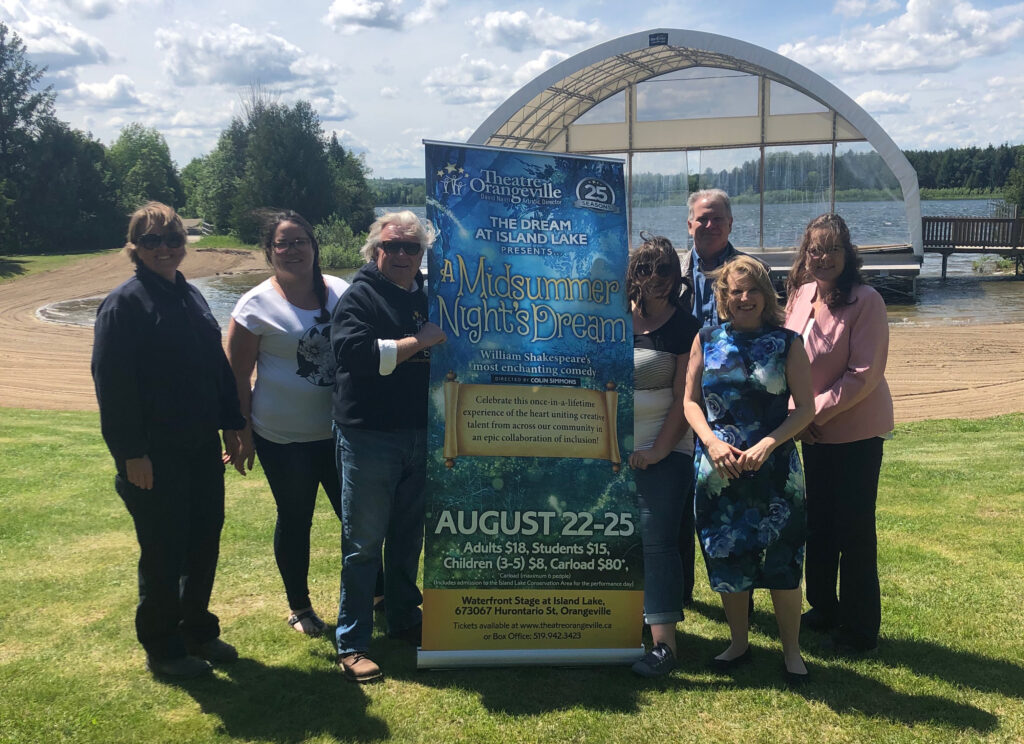 As David Nairn, Artistic Director of Theatre Orangeville will tell you, the idea of mounting Shakespeare's beloved comedy A Midsummer Night's Dream has been brewing in his mind for over a decade. Now, in celebration of Theatre Orangeville's 25th anniversary, that dream is about to come true.

Opening on August 22nd, running for five performances only to August 25th, The Dream at Island Lake presents A Midsummer Night's Dream, directed by Colin Simmons, at the outdoor, waterfront stage at Orangeville's Island Lake Conservation Area. It will be the most fantastical, magical, and massive production in Theatre Orangeville's history.

Mr. Nairn's dream involved Theatre Orangeville creating “a piece that really captured aspects of all our community,” he says, including “professional actors, community actors, members of our Young Company, and also members of our Creative Partners on Stage – our special needs acting company.”

The Dream at Island Lake evolved from “a desire to bring them together in a project that would showcase everyone,” says the Artistic Director. When Island Lake came on board, he says, “the whole idea coalesced and came into a magic dream.”

Orangeville's own musical choir, the Sweet Adelines, will also lend their voices to become an “ethereal chorus in the fairy landscape of The Dream.”

A Midsummer Night's Dream by William Shakespeare is romantic comedy at its very best. Included in the young romantics are: Helena, who desperately loves Demetrius, who used to love Helena, but has now decided he loves Hermia, but Hermia desperately loves Lysander and not Demetrius at all. Add to that love tangle: a provocative ultimatum and a wedding from a Duke; the mistaken love spells of a mischievous fairy named Puck; Puck's interfering master, Oberon the Fairy King and his strong willed Fairy Queen Titania (who have raging romantic troubles of their own;) an overbearing father; an enthusiastic, but rather unskilled group of actor-mechanics, including one named “Bottom,” who spends much of his ‘midsummer night' as a donkey... and comedy and chaos ensue.

For the professional equity actors involved, A Midsummer Night's Dream is certainly one of those tour de force experiences – a “dream” come true. For the local community and teen performers involved in this production – to work on a Shakespearean play along side fully professional directors, actors, and a choreographer, as well as a technical team that includes professional set, costume, sound and lighting designers – is an extraordinary, almost unprecedented learning experience, that they will never forget.

David Nairn is giving his many fans an additional thrill, by taking on the role of Duke Theseus in the show.  He told the Citizen that he had not been involved in a Shakespearean play in 25 years. “It feels brand new” and “really, really exciting,” he said.

“I can't believe that we are starting our second week of rehearsals,” he said. “It's been 10 years in the making and now it's happening. We have a fantastic cast, we have a brilliant creative team, and the set is incredible.”

“From a personal point of view,” he added, “I can't remember when I've been involved in a show that was more thrilling, challenging, frightening, and awe-inspiring. I have learned more in the last week about my craft as an actor than I have in the last 20 years. And that's the truth.”

Mr. Nairn says the show's Director, Colin Simmons, is able to bring out the best in people and challenge everyone. “Colin is relentless in his desire to tell the story,” he said, “because it is such a fabulous story... Shakespeare was the greatest storyteller of all time.”

“Audiences will take away a new appreciation for Shakespeare and understand every word that is being said on stage,” which, David Nairn noted, “can not always be said when one sees a production of Shakespeare.”

He added, “The show is a million miles beyond my expectations and how I dreamed it would be for the last ten years. My dreams were too limited... when you add the creative elements, it becomes something else.”

He takes great joy in seeing the community coming together on this project – the support of local businesses, and generous individual donors, ticket sales that are going really well, the professional actors, community actors, kids as young as 12, creative partners on stage, along with the design professionals.

“It's never been done on this scale,” he says. “Everyone involved in it, wants it to be their best work.”

Theatre Orangeville calls this production of A Midsummer Night's Dream “A once-in-a-lifetime experience,” and, in the words of Mr. Nairn, “A magical creation of something that is going to be super special – the likes of which we have never seen in our community.”

Island Lake Conservation Area is located at 673067 Hurontario Street S. in Orangeville. This is outdoor theatre, so bring lawn chairs or a blanket. Tickets cost $18 for adults, $15 for students, and $8 for children and are available on line at tickets.theatreorangeville.ca, or in person at the Box Office. (Please pick up tickets prior to the event.)