Junior A Northmen leading 2-0 in playoff series against Brampton 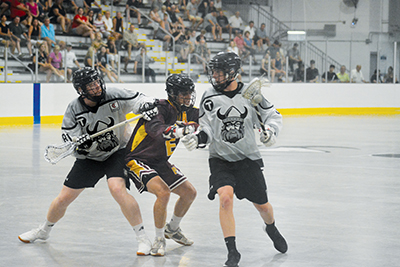 The Rayburn Construction Orangeville Junior A Northmen are leading their second round playoff series against the Brampton Excelsiors after taking the win in Sunday night's game in Brampton.

The Northmen eliminated the Mimico Mountaineers in the first round in a series that went four games.

The battle with the Excelsiors got underway on Friday, July 19, at the Northmen's home at Tony Rose arena.

In a low scoring game the Northmen left the floor with 5 – 3 win after shutting out the Excelsiors in the first period.

The Northmen were up 3 – 0 when Waters got his second of the night on a powerplay just 37 seconds into the second frame.

Brampton managed to score three second period goals to make it a 4 -3 game with one period remaining.

The Northmen shut down the Brampton attack in the final period allowing no goals and getting a single from Jonathan Donville to win the game and take an early lead in the series.

Game two of the series got underway at Memorial Arena in Brampton on Sunday, July 21.

The Northmen had a huge first

Dylan Watson got two early goals before the game was three minutes old.

Tei Oaks got a single, while Mike

McCannell and Tanner Buck both scored a pair.

Orangeville was leading 10 – 4 at the end of the second period.

McKenna scoring a single at the midway mark.

Northmen 5 – 3 for the period but the Orangeville effort in the first two period made all the difference and the O-vill team held on for a 13 – 9 win to lead the series 2 – 0.

Game three of the series was scheduled for Tuesday, July 23, at Tony Rose arena.