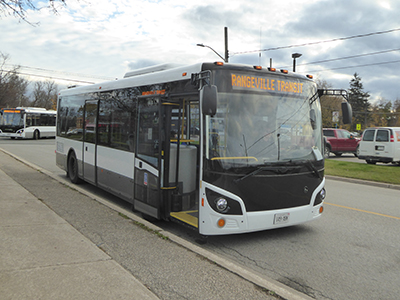 Town staff informed the Citizen late last week that two of the three buses servicing the community's transit system were “offline” for a period of time stretching from mid-June into the early days of this month.

While it remains unclear how long the buses were off the road, John Lackey, Orangeville's Manager of Transportation and Development, insisted all buses will have been returned to service as of the end of this week.

Orangeville's third transit bus is currently undergoing repairs following a recent collision, meaning, as of press time, the municipality has just one of its three buses on the road.

Orangeville's previous Council spent more than $1.2 million acquiring the three brand new buses for the town's transit system. Between 2016 and 2018, the Town bought one bus annually, at a cost of approximately $400,000.

While staff could not provide an answer clarifying how much time these new buses have spent off the road and in the shop, the Citizen can confirm there have been at least four occasions in the past 18 months when the municipality has had to draft in a ‘loaner' bus to help service the three routes in town.

“The Town is contractually required to supply a spare bus for times when routine maintenance and unexpected out-of-service situations occur,” said Sheila Duncan, Orangeville's Manager of Communications and Corporate Services. “A new fourth/spare bus is to be delivered in early August, so that will provide some relief when a bus needs maintenance, or out-of-service situations (occur).”

Originally, the Town was looking into developing and adopting a fourth route in town, but those plans are seemingly on hold as the municipality instead focuses on finding a permanent home for its long-talked-about transit transfer station. Back in August of last year, Council signed off on placing the station on Centre Street, in front of the county-owned Edelbrock Centre. The County signed off on that plan in March.

At a Council meeting on May 13, former Orangeville councillor Sylvia Bradley called on the municipality to hold off on making any “rash decisions” regarding the future of the transit transfer station. She contested the proposed location on Centre Street was too close to the community garden and orchard, raising concerns that the fumes and toxins emitted by the buses would contaminate fruits and vegetables that help to stock the Orangeville Food Bank.

The proposed plan called for an island to be installed on Centre Street, alongside layby lanes where the buses would idle for a period of time. Council has agreed to hold off on making a final decision on the station until a new community task force has had an opportunity to review and provide recommendations on the community's wider transit strategy.