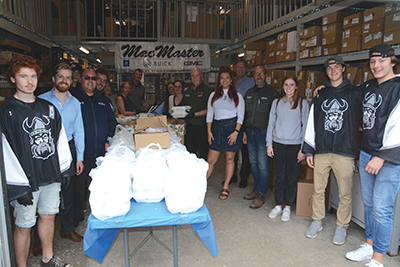 The aroma of barbecued chicken was drifting across the lot at MacMaster Buick GMC in Orangeville during the local dealership's annual MacMaster Chicken Drive on Wednesday, May 29.

The event has grown in popularity over the years and this year they prepared 600 chicken dinners from a barbecue that was operated by Maple Lodge Farms right on the lot.

The event was sold out with most tickets sold in advance.

It started out as a fairly small event in the first year but word got around and it became more popular with every barbecue.

“We were looking for ways to raise money for the hospital,” explained dealership president Danny Brackett as for how it got started. “We had a lady that worked here for us in the parts department and her husband worked for Maple Lodge Farms. He worked for Maple Lodge Farms for years then retired and started doing these fundraising barbecues. Jeff (Marshall, parts manager) invited him to come over and we had around 75 or 100 dinners the first year and now we're up to 600. We match it dollar-for-dollar. The reason it tastes so good is because they cook the chicken on really fresh charcoal. This is strictly a MacMaster GMC Buick initiative that they started the year before I came here.”

The tickets are mostly pre-sold through the dealership although some were purchased onsite on Wednesday.

Volunteers from the dealership helped to package the dinners and were joined by members of the Orangeville Northmen Junior B lacrosse team in uniform.

MacMaster Buick GMS is the main corporate sponsor of the local Junior B lacrosse team.

The funds raised are donated to the hospital foundation who then direct the money to specific needs at the Health Care Centre.

“Our thoughts were, with Jeff and the rest of the team – we all just wanted to figure out ways to promote and raise money for the hospital because at some point in time we're all going to be there,” Mr. Brackett explained. “Every year we've tried to make it bigger and better.”

At the end of the day, the MacMaster team were able to raise $6000 for the Headwaters Health Care Foundation.