Grand Valley duck race goes on without the ducks. 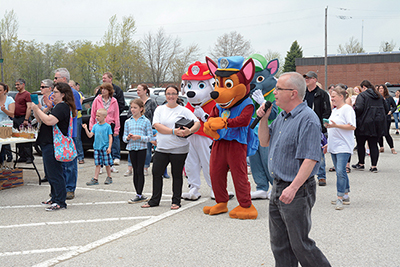 The ducks didn't hit the river this year but the prizes were still awarded during the 24th annual Grand Valley Lions Club duck race.

The yearly event usually attracts quite a crowd along the Grand River as people watch as thousands of numbered ducks are dropped into the river. When they pass the finish line downstream, the winner and runners-up receive a prize – and a good one.

This year the actual race was called off when weather reports indicated an electrical storm was brewing and recent wet weather caused problems for vehicles along the river bank. Organizers decided to be safe rather than sorry and moved the event to the Grand Valley and District Community Centre.

People go the hint that something was up when they arrived at the river only to find the large crane that usually drops the ducks wasn't there. Word got around that the event was moved an people began arriving at the arena.

The event was sold out with all 3500 available tickets being purchased with hopes of winning.

The grand prize this year was a brand new ATV.

“Too much rain and it was too wet down at the park,” said Lions Club duck race committee chair Randy McClelland. “We had trouble getting in there with vehicles. It was just too wet.”

The duck race is a major fundraising event for the Lions Club who in turn fund projects of local nature.

“This is our 24th year,” Mr. McClelland explained. “We've got a bunch of community projects going on. All the money raised goes back into the community. We're working on the splash pad and it's supposed to be constructed in July. All these prizes today were sponsored. We've got great sponsors. We've got four prizes worth over $1000. First prizes is an ATV.”

The event raised around $18,000 to help with those community projects.

Fun with the Lions Club is only getting started. Later on in the summer the Club is sponsoring a soap box derby that will be held on June 29.

“It's going to be held on Mill Street,” Mr. McClelland said. “We had it a couple of years ago in town and it was really successful and we were disappointed it didn't happen last year so we decided to do it this year.”

While the ducks didn't hit the river this year the event was still a big success and of course they will be back on the river next year.