Junior B Northmen have strong start for 2019 season 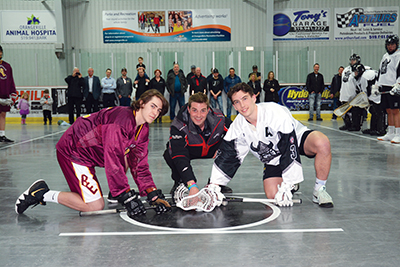 The Orangeville Junior B North have delivered a strong start to their season winning their first four games to lead the division in the early going.

The squad had two roads game to get the year underway beginning with a season opener against the Newmarket Saints on Friday, April 26.

That first game ended with a 12-8 win for the Northmen after they took an early 4-1 lead in the first period and finished off outscoring the Saints 4-2 in the final period.

The second game of the season had the Northmen in Mimico to take on the Mountaineers.

After being behind for most of the game and going into the third period trailing by two goals, the O-ville squad shut-out Mimico in the final period to tie the game then go ahead to take the lead and leave the floor with a 9-8 win.

The home opener took place on Tuesday, April 30, when the Brampton Excelsiors came to town for a game at the Alder Street arena.

The Northmen moved into a solid lead in the first frame to lead 4-2 when the buzzer sounded.

They stayed ahead in the third outscoring Brampton 2-1.

O-ville finished off the night with three goals in the third period for a 9-4 win.

Back on the road for their fourth game of the season, the Northmen were up against the Halton Hills Bulldogs.

This was a tough game that saw the teams battle to a 3-3 tie in the first period.

Halton Hills was in the lead at the end of the second by a single goal.

The game was tied at the midway mark in the third period.

The Northmen got the win on a goal with 42 seconds left on the clock for an 8-7 win.

In addition to the Northmen, four other teams in the League have had strong starts and are undefeated.

The Akwesane Indians are 4-0 to start their season.

The Green Gales also have four wins behind them after four games.

In the South West division the Six Nations Rebels are leading the pack with seven wins after seven games.

The Northmen were back home on Tuesday (May 7) night to host the Orillia Kings with results not available at press time.

They will return to the Alder Street arena on Saturday, May 11, to host the Gloucester Griffins.