Make a Difference Marketplace a fundraiser to battle DBA 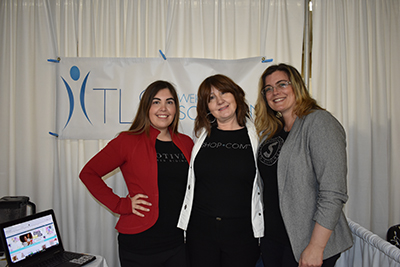 Last Saturday, May 4, Diamond BlackFan Anemia Canada hosted the first ever Make a Difference Marketplace in Orangeville which featured over 30 different craft vendors.

Janet Pereira, Diamond Blackfan Anemia (DBA) executive director, created the Make a Difference Marketplace to fundraise as a not-for-profit charity that is close to her heart, DBA.

Jack, was diagnosed at 12 weeks old with the rare blood condition. He is one of 100 patients in Canada living with DBA right now. Jack's body doesn't create red blood cells, so every three weeks he requires a blood transfusion to stay alive.

Each vendor at the marketplace was required to support a charity of their choice, whether it be a donation of 10 percent of their sales from the day, selling one specific item with all the proceeds going to a charity or even a buy one donate one item were all acceptable ways to contribute to a charity.

Tracy Fast and her sister started Booboo's Beanies after her youngest daughter was diagnosed with cancer two years ago. After having difficulty finding a stylish yet comfortable and lightweight hat for her daughter to wear during her chemotherapy, they decided to create their own. This was the start of Booboo's Beanies.

“The hats were really popular at the hospital so we decided that we wanted to be able to give them to her friends at the hospital and then our friends and family really loved the whole idea. They also were asking where they could buy one for themselves so we came up with the concept of buy one give one, so every time someone was purchasing one for themselves essentially, they were purchasing two and the second one was going to kids with cancer,” said Ms. Fast.

Booboo's Beanies was asked to attend The Make a Difference Marketplace after working with Ms. Pereira at another craft show this past winter. Janet says Booboo's Beanies inspired her to create a marketplace where every vendor was working to support a charity.

To date Booboo's Beanies has donated 1,400 hats to children fighting cancer at the McMaster Children's Hospital in Hamilton, Ontario.

Charities like The Hospital for Sick Children, SPCA Orangeville, Colorectal Cancer Canada, The Ontario Rett Syndrome Association, Raising the Roof and many more were amongst the charities supported at The Make a Difference Marketplace.

Cancer survivor and owner of Soups N' Such, Kerry Anne Gibbins attended the market place this past weekend with hopes of selling her homemade soups and sweets. Ms. Gibbins started her business in 2017 after having a kidney transplant, it was a way for her to stay busy while not putting too much pressure on her body.

Soups N' Such has a variety of different soups and sweets including gluten free, vegetarian, organic and diabetic options.

“My products are healthy for you, and because I have cancer it's also great to know you're not getting anything you don't know what the name of it is. You can look it all up on my website.” Said Ms. Gibbins.

“I'm a cancer survivor and I've had 17 surgeries, I'm a constant fighter and survivor.”

Said Ms. Gibbins, who chose to support the Canadian Cancer Society by donating 10 percent of her sales from the marketplace.

Linda Adams decided to join the marketplace the moment she saw the advertisement on social media, after reading that it was a charity event she was ready to get involved and support DBA Canada.

“We're here to educate the community about our amazing products that we have, because everyone deserves the right to know that these quality products are available for their health.”

Ms. Adams added, “The charity we are supporting is Diamond Blackfan Anemia which is near and dear to my heart because we have a very special boy, his name is Jack Pereira and we love him.

“We are supporting this charity today and I will continue to support this through my business called Shop.com Market America.” Shop.com was able to donate $100 to DBA Canada following the marketplace.

Ms. Pereira estimates close to $1,000 was raised for Diamond Blackfan Anemia Canada, which will go towards funding more research both locally and globally.

DBA Canada will be hosting their fifth Jack's Fight for A Cure Gala, their major fundraising event, in November.

Ms. Pereira says she hopes to host the Make a Difference Marketplace again next spring.