Local fundraiser rakes in more than $43,000 for MS Society 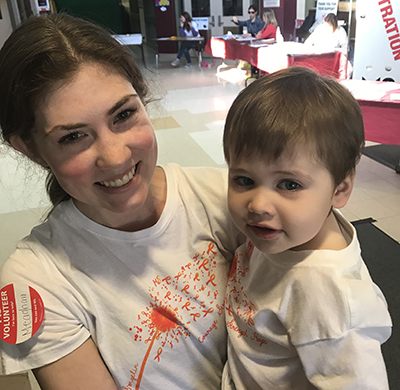 People who walked for a cure for multiple sclerosis in Orangeville easily smashed their target fund-raising goal.

The Orangeville-Dufferin chapter of the MS Society of Canada initially set out to generate $33,000 through donations from participants in the May 5 edition of the annual Mandarin MS Walk.

The 2019 final tally rang in at $43,834 raised by a contingent of 133 walkers and 16 teams. Participants laced sneakers at Montgomery Village Public School on Orangeville's west side and trekked five kilometres under a blue sky.

Last year, various fund-raising efforts throughout the province raised $3.23 million in Ontario to support MS research breakthroughs, according to the society.

On Sunday, gaggles of participants chatted and strolled while others pushed strollers or pulled wagons with children stowed inside for the morning sojourn.

Meaghan Mitchell was part of Team Spirit, that bested their $150 goal by $40. Her father, who used to work as a farmer in Caledon, was diagnosed with MS in 2000. She said he tended the family farm until he was no longer able to work.

“Every year we've been walking for him, trying to raise money,” she said. “This is my 17th year walking for MS.”

Ms. Mitchell and her family previously took part in findraiser walks in Caledon.

“My goal is to try to promote the walk in the community so more and more people can get awareness about MS and how to support different people with MS,” she said. “Just to make it local.”

Ms. Mitchell said people get involved to see and meet other people dealing with the disease in their own ways while helping raise money toward a cure for MS.

Research funded with money raised through events like Mandarin MS Walk has contributed to the growing evidence on the link between vitamin D deficiency and MS.

Vitamin D promotes calcium absorption, and directly interacts with genes associated with the immune system. It decreases the risk of developing MS, and may also beneficially modify the course of MS.

Alison Adams, one of the event organizers,  said money raised by way of the annual walk and other similar events stays in the communities that hosted the walkers.

“All of the money from the walk that we raise here stays local,” said Ms. Adams. “We have a support group, so the money will go to them. … If somebody with MS in the community needed a wheelchair or needed assistance with something, they could contact the MS Society and they would sort some funds out for them.”

Ms. Adams' husband has MS and at one point participated in an experimental treatment through St. Michael's Hospital in Toronto. The program used chemotherapy as a treatment for MS.

“He did that for three years,” she said. “Before that, he couldn't walk. Now he's walking. He can't run or jump or anything like that, but he can walk from here to there.”

About 125 people registered online to take part in the walk. But, said Ms. Adams, a lot more than that tally showed up for the event. Participants were also able to register for the walk at Montgomery Village Public School before the start.

“There's a lot of people here today,” she said. “It's better this year. We usually get about 100 people. They say we're out of T-shirts, so that means we did really well.”