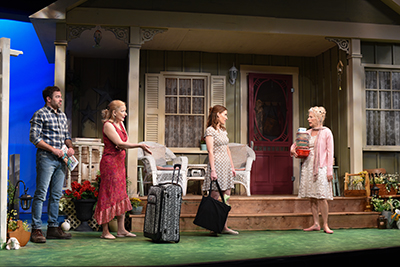 We should give David Nairn, who's been Artistic Director of Theatre Orangeville, now for 20 years, a standing ovation.

Overall, for his splendid leadership with the theatre, putting it on the map as unique in Canada, for its fine productions, its support for Canadian talent in the theatre and, particularly, for the innovative partnerships it has with communities within this community.

Immediately, for premiering Kristen Da Silva's latest play, Where You Are, as the final production of the 2018/2019 Season, on now and running to May 19. This is, truly, the perfect finale to the season.

Our story takes place entirely at the front  of the house, a charming establishment designed by Beckie Morris, set designer extraordinaire, with flower pots on the side of the porch and a swing for two on the lawn. A utility shed stands off to the left, the roof of which needs some mending but, don't worry, Patrick will take care of it.

Featuring Debra Hale, Melanie Janzen, Jeff Hanson and the playwright herself, this play is funny all the time until a moment of shock, which Ms. Da Silva handles with clever, compassionate writing. What more could one want from an evening at the theatre than to leave with several humorous lines floating through one's mind and a sense of the possible?

For a partial synopsis, two sisters, Glenda and Suzanne, are living in their home on Manitoulin Island. This is the family home, back a couple a decades or so, where Glenda lived with her husband. At some point, the couple were joined by Suzanne, who was pregnant when she arrived. They have lived together since then; during that time, Glenda's husband died and Suzanne's daughter, Beth, became a doctor, practising in Toronto.

Beth is on her way to visit them and what we learn even before she gets there, is there could be mother/daughter tensions, from Suzanne's tendency to criticism and Beth's objections.

The sisters treat us to a lecture on the subject, in which Glenda delivers, “have you considered saying something nice?”

Into all this is Patrick, the neighbour and veterinarian, who pops in and out, to visit and offer any assistance the two ladies may need. He does handy work around the house and spars conversationally with them.

“We pay him in jam,” Ms. Janzen, as Glenda, informed us. His favourite is raspberry.

Before long, Beth arrives, wearing a pair of trousers that entice her critical mother to comment but Aunt Glenda holds back the tide with subtle reminders. Mother and daughter still struggle in many minor ways, regardless of diplomacy. They are quite comical about it.

Directed by David Nairn, who understands the value of giving just enough direction and staying out of the way, this terrific cast delivers the comedy with sharp wit and perfect timing.

Melanie Janzen is an old pal here at Theatre Orangeville, having performed the triple threat of roles, Jonesy/ Delores/Gloria in last season's hit, Screwball Comedy, and several other productions over the years.

She is hilarious again in this play. It is as though she has a special fondness for the part, so relaxed and spontaneous is she.

Sister to her in their roles, Debra Hale is fussy and funny as Suzanne, a fine balance of the tension her character usually suffers and easy when the moment justifies. There is a scene later in the play when the two sisters are really relaxed and we, the audience, laughed ourselves silly all through it.

Ms. Hale has played in Miracle on 34th Street here at Theatre Orangeville and Freedom 85, which she also wrote.

Welcome back as well, to Jeff Hanson, who was in The Gentleman Clothier and Stag and Doe at this theatre. He brings humour and the just the right foil to the ladies – his solid masculinity, which they enjoy – and manipulate; this latter, with true graciousness, he accepts.

While this is the second play from Kristen Da Silva, the first being Sugar Road, it is her first time on the main stage here at Theatre Orangeville, in the role of Beth. The author of this amusing play, Ms. Da Silva is fun to watch performing in it too.

Bringing recent and heretofore undisclosed news with her, Beth, glad to be home but still a little conflicted, has some issues to face, as the story unfolds.

When asked later, at the reception following the opening night performance, what it is like to act in her own play, Ms. Da Silva's answer was quite spontaneous - “It's fun!” she declared.

A few words en passant with Jeff Hanson, so thrilled with the production, what fun it is and how touching, “I'm so honoured,” said he, “to be working with these actors – they carry the show but I'm really happy to be part of it.”

Throughout the play, the dawn lights the day, the evening settles into night and all the needs of the story and the mood are supplied by the creative team of Wendy Lundgren, Lighting Designer, Dan Palmieri as Sound Designer and Wendi Speck doing the costumes. The glue keeping the whole together, the Stage Manager, is Jory McLean.

Naturally, within the tale, romance is in the air. After all, the genius of David Nairn is to know that love conquers all.

For tickets for this brilliant couple of hours at “your” theatre, go to the Box Office at 87 Broadway (Town Hall) or the Information Centre on Buena Vista Drive at Highway 10; by telephone on 519-942-3423; online atwww.theatreorangeville.ca