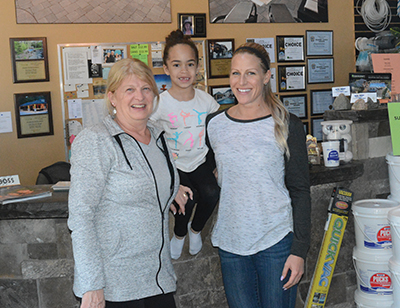 When Rob and Cathy Koolen opened New Wave Pools & Spas back in 1989, they had no idea they were launching a community staple that would thrive for the next three decades.

High school sweethearts, the pair were raised right here in Orangeville. When, after spending several years learning the ropes of the swimming pool construction and maintenance industry, Rob wanted to go into business for himself, and it was only natural they would look to set up shop in their hometown.

“Rob has always been in the pool business. His first job, when he was 15 years old, was building pools for his dad in Brampton,” Cathy recalls. “We then spent time down in the United States, where Rob, again, worked with a pool manufacturer, but we always knew we wanted to come home. When we finally did, Rob thought it might be a good idea to go into business for ourselves.”

While those first few years were tough, the Koolens persevered. Setting up their first store on Robb Boulevard, New Wave Pools, as it was known at the time, was one of four companies operating locally that serviced residential swimming pools. For a town of approximately 17,000 people, that was a lot of competition.

While in its early years the company was, in every sense of the term, a family business, run almost exclusively by Cathy and Rob, New Wave Pools & Spas has grown to the point that it boasts 16 full- and part-time employees. Keeping to its family-oriented roots, the business is, today, second-generation, with daughter Amy often on hand at the company's new base, at 302 Broadway, to assist customers.

The success of New Wave Pools & Spas has also allowed son Zach to go into business for himself. He operates his landscaping company, Cedar Croft Landscape & Design, out of the same building.

“Zach was one month old when we first opened the store. I had both kids in there with me all the time. It has always been a real family business, and still is today,” Cathy proudly proclaims. “We still have customers coming in today who remember Zach as a baby and Amy as a toddler, which is nice.”

When asked to explain the wide array of services the business provides to the community today, Cathy ran through the extensive list with ease, noting New Wave basically does “anything and everything” to do with residential pools.

“We cover pool openings and closings, service of any issues with equipment, liners underground plumbing. We install new equipment for people. We install new pools, including steel walls and vinyl liners,” Cathy said.

On average, the local company installs around 45 swimming pools per year. While based in Orangeville, the organization covers a vast area, with Cathy noting recent jobs have been completed in Arthur, Mulmur, Melancthon, Nobleton, Kleinburg, Newmarket, Brampton and Georgetown.

On top of the construction and maintenance side of the business, Cathy says New Wave also offers complimentary water testing on site, while also selling a wide range of products, including robotic pool cleaners, water chemicals and a variety of accessories that can be used in, and around, a swimming pool.

Speaking specifically about the products, Cathy says she has a sure-fire method she uses to ensure she's able to stand behind everything sold in store.

“I will research and use products extensively before selling them to our customers,” Ms. Koolen said. “When robotic cleaners first came out, we were told they were the cat's meow. I wouldn't sell them until I was satisfied. I'm never, ever going to tell my customers something is great if I don't believe in it and I haven't used it myself.”

Local residents will have the opportunity to win some of the products sold at New Wave Pools & Spas when the company hosts its Customer Appreciation event on May 11. The organization is hosting a barbecue at its location on Broadway, with Cathy noting there will be “all kinds of awesome things” available in a raffle, with proceeds from the day to be donated to the Orangeville Food Bank.

With another major milestone now in the rear-view mirror, Cathy says the Koolens will take things “year by year” regarding the future of the business, just as they have done ever since starting out. With grandchildren now growing up, the prospect of a third generation entering the fold wasn't lost on Cathy.

“That sure would be neat,” Cathy stated, cracking a smile.

Looking back on the many successes the company has enjoyed here in Orangeville, Ms. Koolen wanted to make a note of thanking the people she claims “made it all possible”.

“We're lucky in the sense that we have a very loyal customer base, who have really helped us get to where we are today,” Cathy said. “One of Rob's friends says it takes 20 years to become an overnight success, and that's exactly what we've seen. It was a hard first few years, but we got through them. This is a special community, and I'm delighted to say we've been able to make it 30 years.”