Orangeville students stand up for their planet’s future 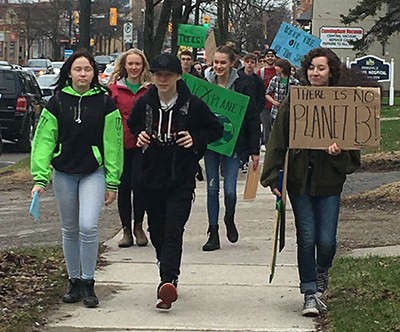 Basically following a call to action by Swedish teen Greta Thunberg, this demonstration – Friday for Future – was instigated by students from Orangeville schools. They were joined by their like-minded family members of all ages, as well as others who share their concerns.

Another protest about climate change in Orangeville? Indeed, yes, but with a difference: this is a youth-driven initiative, prompted by the now globally famous Greta who has told assemblages of high-ranking politicians that they are “too immature to face the truth about climate change..” that “they have placed the burden of climate change on the shoulders of the young.” And “we will tell the truth.”

The truth is that the young shall inherit the earth or what is left of it after all the damage done to it by 200 years of rapacious industry. They are now determined to influence government and industry to give up their obsessiveness with profits, “leave the oil in the ground” and begin to make energy, vehicles and food production in planet-friendly ways.

It may be said that Olivia Rowan, a grade 10 student at Orangeville District Secondary School, was the spearhead of this march, along with friends, all of whom belong the Environmental Club at the school.

It was she who held the megaphone to declare to Ms. Jones, who was in her office, “We the young people of Orangeville, demand that this government treat the climate as a crisis and start making changes now.”

Olivia read from the letter to world leaders, published on the Friday for Future website, saying in part, “We, the youth of Dufferin-Caledon and the surrounding areas, are deeply concerned about our future. Humanity is currently causing the sixth mass extinction of species and the climate system is at the brink of a catastrophic crisis...Yet we are far from reaching the goals of the Paris agreement ...we will not accept the world's decision-makers' inaction that threatens our entire civilization ...

“We, the young,” it reads, “have started to move. We are going to change the fate of humanity whether you like it not. United we will rise until we see climate justice...you have failed us in the past...The youth of this world...will not rest again.”

Cancellation of the planting of 50 million trees by the Ford government, rationalizing how many trees are being planted by other volunteers was one of many concerns.

“Those are trees are replacing harvested trees,” the Citizen was told. “the 50 million are new crop.”

Sylvia Bradley, former councillor and volunteer tree planter, has planted 1,000 trees over time and is the recipient of the CBC's Stewardship Award.

In conversations with several of the students, the Citizen heard, “The discussion is online on snapchat and Instagram. It's hard to gauge who's listening. We can see how many times people click on them but not whether they share or not.”

“Governments have the tools to make things change. Everybody has to be on board. How do we reach the corporations? Just by getting them to listen.”

“Humanity is causing the extinction of the species and they are not included in the conversations – they're the voiceless future.”

An exchange student from Spain told us about how cell phones are re-used there.

“The UK has declared a climate emergency.”

In fact, this is correct. According to the BBC, “MPs have approved a motion to declare an environmental and climate emergency.”

Later, a few students did the same and were given the same reply.

Ms. Jones didn't come out, but later that day, at another venue, we were able to speak to her and ask about her not coming out.

She told us, “They did not make an appointment with me or notify me of their intention to be outside my office and I was in meetings all day long.”

“Without any chance of a break?”