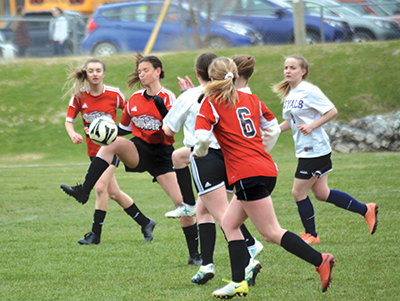 The Westside Secondary School Thunder girls team came out on top in their first game of the season when they travelled to Shelburne to take on the Centre Dufferin District High School Royals.

The Thunder played a well executed match on the soccer pitch during the Monday, April 29, game.

With good positioning all around the squad scored twice in the first half to lead 2-1 when the whistle blew for the break.

Returning or the second half, both teams were up against the weather. After a start in cold and windy conditions, ice pellets started hitting hitting the field in the second half of the game making playing conditions difficult.

Players on the sidelines tried to

keep warm in the less than spring like conditions.

The Thunder pressed hard in the second half and scored on a nicely set up goal with a pass across the front of the net.

They followed up with another goal to win the game 4-1.

It was the first game of the District 4 season.

There are five teams entered in the District this season.

The Thunder travelled to Palermerston on Wednesday, May 1, to take on Norwell District. Results were not available at press time.

The Westside girls will play their first home turf match on Monday, May 13, when the host Welliington Heights.