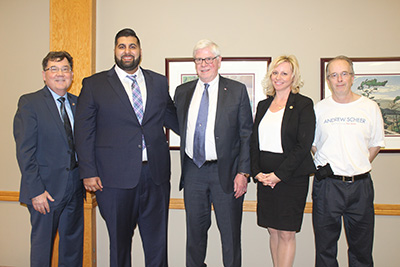 While reports surrounding Harzadan Singh Khattra's standing within the Conservative party have, as of press time, been unconfirmed by senior party officials, local board chair Jennifer Innis has taken the step to postpone the association's Annual General Meeting.

With the meeting originally scheduled to take place last night (Wednesday, April 24) at Victoria Parks Community Centre, Ms. Innis informed the Citizen the AGM has been postponed as the “nomination appeal process” is still underway. She indicated the meeting will be rescheduled once a certified Conservative candidate was in place here in Dufferin-Caledon.

The decision to cancel this week's AGM was made over the Easter long weekend. At approximately 9:26 p.m. on Saturday (April 20), Ms. Innis sent out an email to Dufferin-Caledon Conservative Association board members stating she had been contacted by the party's National Council, who were requesting the meeting be postponed.

The National Council, which is made up of volunteers spread across the country, have been considering an appeal submitted by Barb Shaughnessy more than three weeks ago. In that appeal, Ms. Shaughnessy questioned the validity of the Dufferin-Caledon voters' list, alleging some of the newer members signed up by Mr. Khattra, or members of his team, shouldn't have been allowed to vote during the March 19 nomination meeting.

Earlier this month, Ms. Shaughnessy informed the Citizen she had signed affidavits, which she claims prove that ineligible members had been allowed to vote during the nomination. She says that both international students and out-of-riding residents helped to swing the vote in Mr. Khattra's favour.

Multiple requests for comment from Mr. Khattra have been unsuccessful. When asked to provide an official update to substantiate any of the rumours that the National Council has come to a decision regarding Ms. Shaughnessy's original appeal, the Conservative Party's Director of Communications Cory Hann kept his cards close to his chest.

“There is an appeal still in process right now,” Mr. Hann said.

Mr. Hann added, “I don't have anything I can add until that has been heard and decided. When I hear of a decision, I'd be happy to follow up.”

There has been a clear divide within the Dufferin-Caledon Conservative Association since the March 19 vote. On that night, Mr. Khattra emerged as the surprise winner of the nomination, soundly beating Kevin Weatherbee in the final round of voting after Ms. Shaughnessy and former Orangeville Mayor Jeremy Williams had been previously eliminated in the ranked ballot voting system.

Shortly after results from the nomination were revealed to the public, Mr. Weatherbee informed the Citizen he had serious concerns regarding membership, indicating he'd heard from several members who were prevented from voting during the nomination, despite holding a valid Conservative membership. Both Mr. Williams and his campaign chair, Kelly Zammit, have taken to social media on numerous occasions over the past month to question the entire process.

“My sources have told me that irregularities were found in the selection process. Based on my personal observation of the nomination process, that comes as little surprise,” Mr. Williams wrote. “If the process was in fact tainted, it would mean the entire vote held on (March) 19 was invalid. You can't pick and choose which parts you like from a spoiled process. If it's tainted, it's tainted.”

He went on to state that he has been informed the party will not hold another vote, regardless of the National Council's final decision. It is Mr. Williams' belief that either the National Council or the Electoral District Association (EDA) will likely select one of the three other candidates to stand if Mr. Khattra is, ultimately, disqualified.

The decision to cancel this week's AGM has outraged at least one local board member. In an email addressed to Conservative Party of Canada Executive Director Dustin Van Vugt and David Dillon, another high-ranking executive within the federal party, Richard Majkot questioned the logistics of cancelling the AGM with almost no notice provided to local Conservative members.

“Members are contacting me asking about a recent media release indicating that the AGM has been postponed. No member who has contacted me has received any official notification confirming this postponement from the National Council,” Mr. Majkot, who describes himself as the Dufferin-Caledon Conservative membership chair, wrote on Monday evening. “While all 3,800 members have not contacted me, a significant number have… and are looking forward to the AGM.”

Mr. Majkot went on to question what bearing any appeal currently being considered by the National Council has on the local association's ability to host an AGM, while also asking how the National Council intends to effectively contact more than 3,800 members in a timely manner to inform them of the cancellation.

He asked Mr. Van Vugt and Mr. Dillon to provide some much needed leadership in this situation, seemingly calling into question the local board's ability to effectively handle what has become a significant controversy.

“As you know, our Board has been fractured for a long time. We have not operated in an open, fair and transparent manner. We should be pulling together instead of pulling apart,” Mr. Majkot wrote. “This is not in keeping with our duty to uphold and enforce the provisions of the Association constitution. This is not good for the riding, or our Conservative party.”

Referencing the cancellation of the AGM, Mr. Majkot added, “This could be devastating on the pending election… and to the riding that has been Conservative for a long time.”

Mr. Majkot informed the Citizen that, regardless of the meeting's cancellation, he would be on hand at Victoria Parks Community Centre to welcome any member who attends. In her original email to board members, Ms. Innis noted she would also be onsite to advise any member who arrives of the postponement.