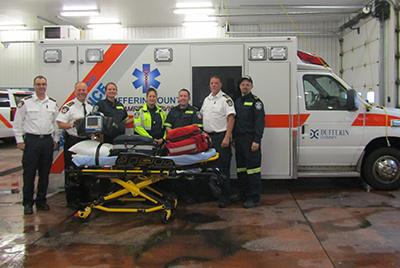 Details surrounding the plan, which will see 59 local ambulance services in Ontario consolidated into 10 centralized ambulatory hubs, were made public last week. In an attempt to quell fears the move would result in job losses across the board, Health Minister Christine Elliott promised that every paramedic currently working in Ontario would be retained throughout the transition.

“No paramedic in Ontario will lose their job. Just the opposite,” Minister Elliott advised the CBC. “As we move our modernization agenda forward, we are working directly alongside frontline paramedics and our municipal partners to ensure emergency health service can better meet the needs of Ontario's communities.”

Mr. Reid first learned of the impending changes late on April 15, on receiving an email from the Association of Municipalities of Ontario (AMO). While he was expecting some changes to ambulatory services in the 2019 Budget, he was not anticipating such a drastic remodeling.

“When I read that the province is going to redefine the current ambulance setup across Ontario, that was definitely unexpected,” Mr. Reid said. “At the end of the day, it is what it is. We had Minister Elliott out here around a month ago. She came and learned about our community paramedic program and how integrated it is with our community.”

He added, “When the Province makes an announcement stating that they're going to reorganize, that changes how we work. We're really looking forward to having discussions with the Ministry, hearing what their side is and then providing our input.”

Currently, the County's paramedic service employs 60 individuals and operates five vehicles out of locations in Orangeville, Shelburne and Grand Valley. On average, the organization responds to approximately 10,000 emergency calls per year and is on call 24 hours a day, 365 days per year. The ambulance provider has been in service in Dufferin County for more than 30 years.

While discussions between provincial paramedic leaders and the government have yet to take place, Mr. Reid noted there are meetings scheduled. Both the Ontario Association of Paramedic Chiefs and AMO have been busy providing daily updates and setting up consultations and stakeholder gatherings.

Asked for his opinion on what a transition to ten centralized ambulatory hubs across Ontario could mean for services in Dufferin County, Mr. Reid was optimistic that things would, largely, stay the same.

“It is total speculation at this point, but I don't see anything changing as far as staffing of paramedics is concerned. You will definitely see the paramedic staffing exactly the way it is today,” Mr. Reid noted. “From what we have taken a look at so far, will things be moved to a different dispatch centre, or a larger dispatch centre, we're thinking those kinds of things may change.”

Mr. Reid noted another potentially positive change is the realignment of various community health-care providers. Currently, Dufferin is served by both Wellington-Guelph-Dufferin Public Health (WGDPH) and the Central West LHIN, with each entity responsible for its own services and programming.

“Currently, there are some different boundaries that aren't consistent across health care in our community. If you think of public health, it's largely WGDPH. If you think mental health, it's primarily the Central West LHIN,” Mr. Reid said. “I definitely see what the intent is (with the announced changes) in the sense of trying to clean some of those things up, so that lines are consistent and (we) don't have as much overlap of different providers.”

Shortly after details emerged that the Province was planning to consolidate its ambulatory services, rumours came suggesting the PC government could be looking into privatizing the industry altogether. The basis for those fears lies in a 75-page report titled EMS Vision-Ontario 2050, released following last year's provincial election. Included in that document are various proposed changes that align with policies the PCs have endorsed or supported in recent weeks, most notably the consolidation of ambulance services.

That document lays out a plan towards possible privatization of the ambulance service industry in Ontario, although Minister Elliott distanced the PCs from such a move last week. When asked, Mr. Reid indicated he wasn't concerned about privatization in the near future.

“From the information I've received, the Ministry has said (privatization) is not their plan. I know there were some people concerned as a result of the rumours, but any time there's a rumour, people start to wonder,” Mr. Reid said. “Personally, I don't think that's where we're going, not for a second. I think emergency services are a definite priority in our community and I'm sure we're not going down that road.”

In the short term, Mr. Reid is using this potential change to spark more conversations with community stakeholders with a view to working toward improving some of the challenges facing Dufferin County today.

“We're working with all of our partners to make the system better. We have one of the best health care systems in the world, but that doesn't mean it can't get better,” Mr. Reid said. “We know that there's challenges when it comes to making the system better. I'm extremely proud of how our primary care physicians are working with other care partners to ensure people don't drop through the gaps, to ensure that people get the support they need.”

He added, “Being realistic, however, when we're looking at things like mental health and addictions, those are very challenging things for our community that we need to do better at. Those are some of the things we need to do more work on. If I had my way, I would want us to focus on and look at better alternatives for people, better care and better access. This is a very complicated system, but if we have somebody who needs care, we want to make it as easy as we can to make sure those people get the care they need and deserve.”