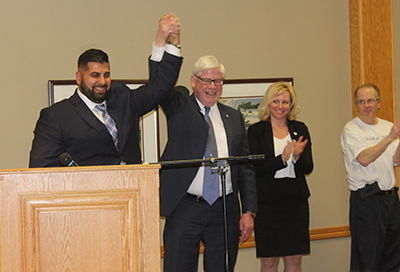 In a stunning turn of events, local entrepreneur Harzadan Singh Khattra has been selected by Dufferin-Caledon party members to lead the Conservatives into this year's federal election.

After he had initially refused an interview with the Citizen following the announcement of his victory, Mr. Kattra was located at his after party, held at Orangeville's Best Western hotel. There, he shared his thoughts on being selected to serve the Conservative party in our riding.

“It feels wonderful, I'm truly lost for words,” Mr. Khattra said. “It's almost like a dream come true for me.”

When asked if he had expected to secure the nomination, Mr. Khattra admitted he was on the fence. He declared during what could best be described as a shaky speech prior to the vote that a record had been broken for the number of Conservative memberships sold ahead of the nomination. During that speech, he pressed home the need for a majority Conservative government to take over in Ottawa this year.

“We desperately need a majority government, not a minority government. We need to make sure our neighbours, our surrounding ridings turn blue as well in this election,” Mr. Khattra said.

While little is known about Mr. Khattra's political background, he described himself as a local entrepreneur and property manager. It has also been reported that Mr. Khattra has some involvement with Orangeville Taxi.

Born and raised in Canada, Mr. Khattra notes, on social media, that he attended both elementary and high school in Brampton and currently resides in Orangeville. In 2010, he enrolled in Atlantic University's School of Medicine, receiving his doctor of medicine credentials in 2015. The school, located in St. Lucia, closed in 2017 and was not accredited by the Caribbean Accreditation Authority for Education in Medicine and other Health Professions (CAAM-HP). In early 2018, the Canadian government announced graduates from the program would not be eligible to apply for Medical Council of Canada (MCC) services, or apply for licensure in Canada.

Official results and numbers have not been released by the local association, with Derek Clark, Chair of the Candidate Nomination Committee refusing to elaborate when asked how strong Mr. Khattra's victory was.

“I will not, as chair of the nomination committee, be releasing any results. The reason for that is that any one of the contestants could lodge an appeal,” Mr. Clark said.

As the smoke cleared on Wednesday morning, it didn't appear that an appeal would be forthcoming.

Mr. Williams took to social media to thank all of his supporters and offer congratulations to Mr. Khattra for winning the nomination, while Mr. Weatherbee, while unhappy with some of the processes put into place during Tuesday's nomination, indicated he would accept the result.

“Obviously we're not happy with the result, but this is how these things go sometimes. We are disappointed with the experience a lot of members had. Some people were denied the ability to vote, and weren't given a clear explanation, in some cases, as to why they weren't on the voters' list when they should have been. We're disappointed with the way the Party conducted the vote,” Mr. Weatherbee said.

He added, “At this point, we're trying to survey exactly what happened. We have people reaching out to us this morning letting us know what their experiences were like. I wouldn't say there is (a plan to appeal) at this point, but we'll see what happens as everyone continues to follow up.”

He, too, would go on to offer words of support for Mr. Khattra.

“Harzadan is the candidate now. We look forward to seeing him go on and carry our party's banner and we'll see what comes next,” Mr. Weatherbee concluded.

In a statement issued to the Citizen, federal Conservative leader Andrew Scheer, who was introduced to Mr. Khattra during a visit to the riding last year, offered his own words of congratulations.

“Canada's Conservatives have a positive vision for Canada, and having Harzadan Singh Khattra join our team will ensure Dufferin-Caledon gets the strong representation they deserve in a Conservative government that will lower taxes, and put people first,” Mr. Scheer said.

“This victory is all of ours, not only mine,” Mr. Khattra said. “We need to be a team. I'm going to lean on your knowledge and your experience and promise to do my very best,” he told Mr. Weatherbee, Mr. Williams and Ms. Shaughnessy. Turning to Mr. Tilson, Mr. Khattra noted, “And David, even though you are retiring, I will still call on you for advice.”

He concluded, “What's next for me? I'm going to be knocking on lots of doors, learning the issues and speaking to local voters. So far, I've been hearing people talk about health care, especially as we only have one hospital in our riding.”

With just 1,771 of the 3,800 eligible voters casting ballots in the first round, Mr. Khattra received 796 votes, short of the 50 per cent required for victory, yet was well ahead of Mr. Weatherbee and Ms. Shaughnessy, who received 468 and 409 votes, respectively. Mr. Williams was far behind with 73 votes and was not on the second-round ballots.

The second round saw Ms. Shaughnessy eliminated and the final-round vote had Mr. Khattra garnering 852 votes to Mr. Weatherbee's 675.

The 2019 federal election is scheduled to take place on or before Oct. 21 of this year.