More than 250 forced from their homes after flooding in Bolton 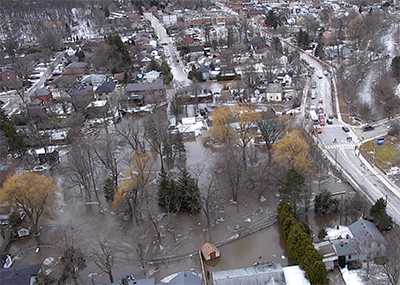 About 250 people in Bolton were evacuated from their homes after a heavy flood spilled on the streets last Friday, March 15.

Evacuees were initially transferred to the Caledon Centre for Recreation and Wellness  to stay overnight. Staff from the Region of Peel then brought them over to the Hampton Inn and Suites.

“The water has gone back,” said Mayor Allan Thompson at a media conference on Saturday. “Pretty much, all the water has left the roads and a lot of the private properties now. People are still pumping out their basements, but a lot of people we're allowed to move back home. The ones that are behind the yellow tape here, some of the homes have flood conditions where the hydro and gas has been shut off.”

Darryl Bailey, Caledon Fire and Emergency Services Chief, said they reached out to residents on social media to contact them about their homes.

“We currently don't have a lot of contacts for all the residents that were evacuated in the area, but we are inviting the residents to either contact the Red Cross or come to the emergency scene to our command post and we'll log you in with the command post,” he said. “At that point, you'll be able to do a site visit back to your house and our intention is to try to release as many homes as we can back. As you can imagine, some of these homes are well beyond damaged.”

Reid Harding was one of the homeowners in the area moderately affected by the flooding. He said his wife stayed home because she didn't want to leave their cats.

“I had some basement flooding because of the water,” said Mr. Harding. “I have some sump pumps pumping it out. It shouldn't be too much trouble other than the furnace and the water tank that'll have to be inspected.”

He can't remember anything like this happening in Bolton ever since he moved there.

“I live right by the river, and I can see the water level incoming there,” said Reid. “I happened to be home, which is not usual, and when I looked outside at 1 p.m. in the afternoon on Friday, the river was higher than I've ever seen it.

He said he contacted the TRCA (Toronto and Region Conservation Authority), left a message and they never called him back. He also called the Town of Caledon, who told him to call the TRCA. He called the Region of Peel, and they dispatched somebody in the area to take a look.

He said the Town could have placed sandbags earlier to areas that were greatly impacted, which could have sufficiently protected them.

Another nearby resident, Marcel Larouche, owns DC Computers, downtown. He said he wasn't home at the time but said the police went to his house on Cherry Lane at 2 a.m.

Police told his wife to leave the house because they were evacuating more homes. He said James Street was mostly impacted.

“My wife went to my daughter's upstairs of DC Computers and my friend who rented downstairs went over to her son's house.”

He and his wife, who have lived at the house for 36 years, said they have never seen a flood like the one in all the time they've been there.

The flood receded considerably on Sunday, and into Monday morning. Most of the residents should have been back in their homes by then.

Mayor Allan Thompson said about 80 homes were affected but 30 were heavily impacted. He said he spoke to some of the family members that were affected.

“I was here all (Friday) night, and the big thing is the safety of everybody,” said Mayor Thompson. “It was after midnight, about 1:30 a.m., when we did the next evacuation as the water started to infiltrate other streets here in Bolton. We had to expand the area to move people out.

“Safety is key. I know a lot of people were trying to keep the sump pumps going to keep the basements dry, but at some point, when the water starts to flood the house, safety becomes an issue.”

Six homes were particularly hard-hit. James Dick Construction and Marrex Construction, among other companies, worked to break up the dangerous ice accumulations.

“The efforts continued into the night and heavy equipment was brought in,” said Mr. Bailey. “We were able to free up some of the ice jams that were downstream. Unfortunately, due to access, behind the apartment building there is a very rural area. There's a lot of trees and slopes. We had to call off the excavation at about 5:00 this morning and we reconvened at first light (Saturday) morning.”

Mr. Bailey said they received assistance from Brampton Fire and Emergency Services who used a high-tech drone to provide critical information on the locations of the ice jams.

Water on the streets froze up as cold temperatures descended at night. Mr. Bailey said that posed another challenged for them.

“It did slow up the river a little bit, but now we're dealing with ice and some of the homes don't have power or heat,” he said.

Mayor Thompson said the Town has listened to concerns from residents that an incident like this would happen. He said the Town's Public Works department and the TRCA have been monitoring the weather and preparing in case of an event like this.

“This happens every spring,” said Thompson.  “Out of all the years, since '87, we haven't had an incident. We have no control over nature. With a little bit of change in temperature, a little bit of waterflow, all of a sudden you have a big charge of ice coming off our streams from up above, this is what happens.

“The residents are very good, very diligent. They have always told us when this was happening and we deal with it every year. This just happened and this is what we're prepared for. This is why we're able to get the asset in as quick as we can. This is how we've been able to keep the flood impact as small as it is.”

Mr. Bailey said that between firefighters, Enbridge Gas, Hydro One and TRCA, they had about 40 workers on scene.

Hydro One disconnected the power for safety reasons to impacted residents. They said they will provide a credit on their delivery charges for the duration of the disconnection.

Customers who needed to turn off their power for safety reasons will also not be charged for disconnection and reconnection services.

“If water rises above your electrical outlets, baseboard heaters or furnace or is near the electrical panel, call 1-800-434-1235 to have your power disconnected,” said Tiziana Baccega Rosa, senior media relations advisor for Hydro One. “If any water damage to electrical equipment occurs, a licensed electrical contractor needs to conduct an evaluation and make any necessary repairs before Hydro One can restore power.”

They recommend families have a preparedness kit that includes water (two litres per person per day), canned or dried food that won't spoil, a manual can opener, cash, windup or battery powered flashlight, a windup or battery-powered radio, extra batteries for your flashlight and radio, any medical items you require and a first aid kit, blankets, candles and matches, Hydro One's emergency power outage hotline number 1-800-434-1235, a fully charged cellphone and portable power bank chargers.

Caledon East blogger Mira Budd launched a GoFundMe fundraiser to support those affected by the flood.

“Although some may have flood insurance others do not and although we may not raise a lot of money some is always better than none to help the residents during this difficult time,” she wrote on social media.