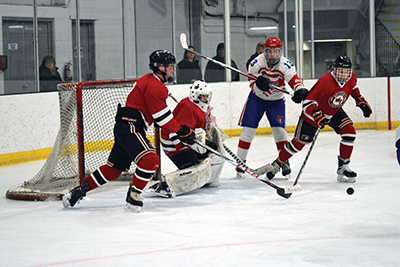 The Orangeville District Secondary School Bears hockey boys hockey team will go to the District 4 championship after a 3-1 win over Bishop Macdonell in their semi-final game on Thursday, February 21, at Tony Rose arena.

The Bears finished in second place in the regular season before dispatching the Westside Secondary School Thunder with a 5-2 win in the quarter-finals on Wednesday, February 20.

It was anticipated to be a tough semi-final game against Bishop Macdonell. Macdonell came to Tony Rose arena as the number three team in the District with an identical 8-2 record that the Bears achieved during the season.

The game ended with a 3-1 ODSS win earning the team the right to go to the District championship.

Bears goals came from Leighton Cooke, and a pair from Andy Whitton.

“We worked hard. We played our positions pretty good, we got the puck out and got pucks on net,” summed up Bears' left wing, Leighton Cooke after the game. “We did what we were supposed to do. They are a good team and they played the body real well. We're going to practice twice (before the final) and get on the ice and be ready to go.”

Bears coach Justin Davis said he appreciate the style of play on the ice from both teams during the semi-final.

“They're (Macdonell) a really good team. It felt like a hockey game today,” Davis said. “It was physical and quick paced and the little things mattered. My concern going in was that our guys play that way and they stepped up. I think we controlled the play for the first half of the game. They got kind of a cheap one and our guys didn't fold so I was really happy with that.”

After the game the squad had to wait out the semi-final game between Wellington Heights and J.F. Ross to see who they would meet in the final.

“We'll practice twice next week and get ready,,” Davis said. “Last year we lost in overtime, short-handed and off a skate and in, so the guys are just hoping for another chance.”

Wellington Heights won their semi-final 5-4 over J.F. Ross so the Bears will face them in the final.

As top seed, Wellington Heights will host in Fergus.

The District 4 final was scheduled for Tuesday, February 26, with results not available at press time.