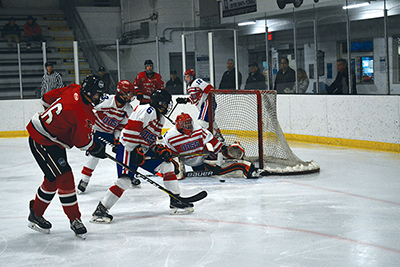 The Orangeville District Bears got a little payback against the Norwell District Secondary School Varsity Reds when the two teams met a Tony Rose arena on Thursday, December 13.

The last time the teams met back on December 5, the Reds handed the Bears their first and only loss so far this season leaving the ice with a 5 – 1 win.

The only real scoring in Thursday's game took place in the first period when OD's AndyWhitton hit the back of the Norwell net.

Bears goalie Mason Kameka put on a terrific show in the second period when the Norwell team pressed hard and kept most of the action in the Bears end. Kameka made several show-stopper saves for the period.

Returning for the third period, the ODSS squad regrouped and were back in control of the game.

With a minute left to go the Norwell team put six attackers on the ice in bid to tie it up.

Josh Presley got the second Bears goal on the empty net. That was followed by another empty netter from Trevor Castle that ended the game 3-0.

“I thought we had a really good

first period. In the second we kind of slowed down and didn't put on the pressure,” said Bears defenceman

Owen Buckley after the game. “We needed to get our feet moving. We weren't moving at all. That was the

big difference in the game – for the

(Norwell) not really a strong team but they can work together really well. They don't have a lot of skilled players but as a whole they work hard.”

After the game the Bears are in second place in the District 4 / 10 stands with a 5-1 record.

Bishop Macdonell out of Guelph is in third place with a 5-1 record followed by Norwell District in fourth and Guelph Collegiate in the number five spot.

The Bears will be back on home ice in the new year when they host Wellington Heights Secondary School at Tony Rose arena on Tuesday, January 8.