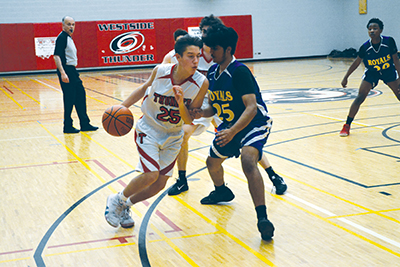 The Westside Secondary School Thunder hosted the Centre Dufferin District High School Royals for a battle for first place in the District 4 junior basketball standings in the gym at Westside on Monday, December 10.

Both teams arrived undefeated for the season and it was the first time the schools have met on the court this year.

The CDDHS team managed to pull ahead by 11 points late in the second half, but the Thunder responded with some aggressive offensive play and managed to reduced the lead to eight points by the time the buzzer sounded to end the half.

The Thunder trailed by 16 at the end of the third quarter largely based on a series of fouls that cost them some points on free throws.

That moved the Centre Dufferin into first place with the Thunder in second.

“We played good in the first half, but in the second – you just can't fight the refs,” summed up Thunder forward, Caiden Caldwell, after the loss. “We kept on top of them, kept getting to the rim, we kept getting good shots. On defence we were staying and helping and trying to block shots. Now we just get this game out of our head and try to focus on the next game.”

The Thunder follow up with 50 - 24 win over Erin District High School on Wednesday, December 12, in Erin.

The Westside team will start the new year with three road games.

They return to their home court on Monday, February 4, to take on Norwell District Secondary School.