One of Orangeville’s most decorated war heroes, Sir Fred Heber dies at 96 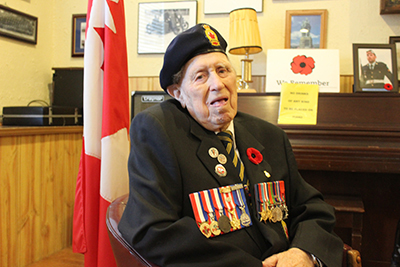 Orangeville lost one of its last remaining Second World War heroes when Sir Fred Heber, a gunner with the 12th Field Regiment, passed away on Monday due to complications with prostate cancer.

A popular figure at the local legion in town, Mr. Heber, 96 at the time of his death, served as an inspiration to many, having spent more than four years in Europe fighting for his country and defending its allies against the Nazi regime. While he didn't like to talk about his time overseas, Sir Fred opened up to this reporter last year for a special feature story ahead of Remembrance Day. It was an interview I certainly won't forget.

A son of old ‘Cabbagetown' in Toronto, Sir Fred was just a boy when the threat of war loomed in the late 1930s. As soon as he was able, he enlisted, joining a childhood friend in signing up in Hamilton in 1940. He was a part of the 11th Field Battery of the 12th Filed Artillery Regiment and was transferred to Halifax, Nova Scotia, awaiting transport to the UK.

He eventually landed in Liverpool in the northwest of England. He spent four years training in the UK. During our interview, he laughed when remembering the equipment he was provided with to lug around – a broomstick, not a gun.

“There wasn't enough equipment to go around. We had one 25 pounder (gun) there on site and that was it,” Sir Fred said. “We had to carry the sticks to make it look like we were carrying guns.”

No matter how much Mr. Heber trained, nothing could prepare him for what was to come. He was one of the thousands to participate in the Normandy landings, storming Juno Beach on D-Day, while he later participated in the Battle of the Falaise Pocket. While the former was beyond traumatizing, with Sir Fred recalling watching countless brothers fall as the Allies attempted to make headway inland, it's the latter that sticks with him most.

“We were fighting in the Falaise Gap – Allies on one side, the enemy on the other. I had made my way up into a lookout spot, it was a good spot to shoot at the Germans. Then we heard the planes, the big boom. It was our boys. They flew really low and started dropping bombs everywhere, but mostly hitting us. We were lucky, we didn't get hit, but the Polish division to our left took the brunt of the bombing. It was a massacre.”

Following success at the gap, Sir Fred was a part of the force that continued to push the Germans east, first out of France, then Belgium and, finally, the Netherlands. He returned home to Toronto in 1945, where he landed a job with General Electric. He would go on to work for General Electric for 40 years. Approaching retirement, Sir Fred and his wife Mavis moved to Orangeville in the 1990s. It's a place he was proud to call home.

“This is a great place, Orangeville,” Sir Fred told the Citizen in November 2017. “It's a nice place to live and the Legion is a good place to meet people, make friends.”

While he was awarded several medals for his efforts during the war, it was one particular award in 2014 that trumped them all, when Sir Fred was awarded the Chevalier – the third level in the Order of France. It is the highest medal awarded by France and has been presented to everyone that served on D-Day and fought at Juno Beach. In early 2017, he met Princess Margriet of the Netherlands, who visited Goderich and personally thanked Sir Fred for all he did during the war.

It was believed that Sir Fred was the last man standing in the 12th Field Artillery Regiment, however another survivor who served in the troop has recently come forward.

Sir Fred's passing will leave a hole in many people's lives, not least that of Chris Paquette, a retired member of the Canadian Navy, who lived with and cared for Sir Fred in the final years of his life.

A funeral will take place on Sunday, Dec. 16 at Dods & MacNair in Orangeville. A visitation will take place at noon, with a Legion service commencing at 1 p.m. There will be another service at the Orangeville Legion at 2 p.m. Ms. Paquette confirmed that Sir Fred would be cremated.